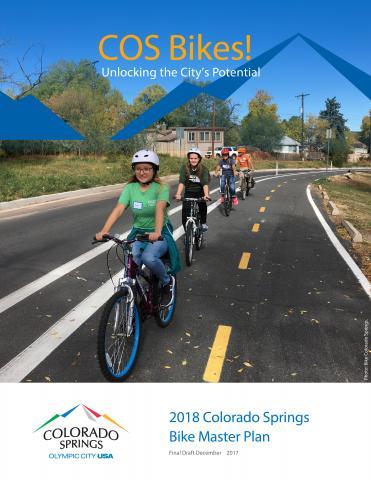 Colorado Springs has an impressive number of elements of an ideal bicycling environment: year-round bicycling weather, striking mountain views, a network of urban and soft-surface trails, extensive single-track options, a large number of bicycling-related organizations, and a supportive city government. Historically, bicycling in the city has been focused on recreation and competition. As Olympic City USA, Colorado Springs is home to the U.S. Olympic Committee, USA Cycling, the Colorado Springs Olympic Training Center, and the future U.S. Olympic Museum. Numerous bicycling-related businesses call Colorado Springs home. Colorado’s second largest city is also a Silver-level Bicycle Friendly Community according to the League of American Bicyclists, reflecting its enthusiasm and support for bicycling.

Why Plan for Bikes?

Though there is a favorable landscape for biking and an enthusiastic recreational focus, relatively few people bike for transportation in Colorado Springs. The bikeway network has large gaps, both in coverage and in types of facilities. An automated bike share system—self-service bicycle rentals reserved at a kiosk or through a phone app—is planned for 2018, which could be a game-changer for how bicycling is perceived and used in the city by residents and tourists alike.

Changes are needed to respond to these factors and make bicycling a safe and convenient way to access everyday destinations, and to make it easy for the City to add on-street facilities such as separated bike lanes.

A core responsibility of government is to make it easy for people to get where they need to go. For decades Colorado Springs excelled at this task, for the people who got around in a car. Not everyone gets around in a car, however; some people choose to walk, bike, or bus, and some people are too old, too young, or medically incapable to drive safely or legally. Some people lack the means to own a reliable car, or no longer have a license. There is increasing recognition that government should make it easy for all people to get around, whether they are walking, biking, taking a bus, or driving. This is reflected in investments the City of Colorado Springs is making in its missing sidewalk program, Mountain Metro Transit, and on-street bikeway improvements.

COS Bikes! lays the foundation for the city to unlock its bicycling potential by creating a more inviting environment so that biking is an enjoyable, dependable, and safe travel option for everyone. This Plan provides a roadmap for success and strategies to strengthen the city’s support of bicycling, build a connected on-street bikeway network, and increase the number of people bicycling safely.

Who Are We Planning For?

COS Bikes! envisions a Colorado Springs where bicycling is a viable, everyday transportation option for a broad segment of the population. While robust data on existing bicycle volumes or mode share is not currently available, U.S. Census data tells us that biking accounted for 0.7 percent of how people got to work in 2014. This very low ridership is not entirely unique to Colorado Springs; it is a reality across much of the country.

While there will always be people who are not interested or physically able to bike, there are many others who do not currently ride because they feel unsafe. This category of potential riders is referred to as the Interested but Concerned, reflecting their interest in bicycling, as well as concerns about safety and comfort when interacting with motor vehicle traffic. Most people in the U.S. have little tolerance for bicycling with motor vehicle traffic unless volumes and speeds are very low. Research from other cities has shown that this Interested but Concerned group accounts for as much as 60 percent of the adult population.

Thousands of Colorado Springs residents want a more bike friendly city and would bike regularly if they felt safe. This plan was developed with these riders in mind, as planning and designing for the Interested but Concerned rider makes bicycling better and safer for everyone, and is Colorado Springs’ best chance at increasing bicycle ridership and improving safety for bicyclists.

There are many people in Colorado Springs who travel by bicycle – those who ride for recreation or pleasure, those who ride to work, to the store, to restaurants or cafes, to school or to visit friends. Some people choose to ride for convenience, some for pleasure or exercise, some because driving is not a choice for them. Some people ride trikes, recumbent bikes, and electric-assist bikes. COS Bikes! includes actions to make bicycling better for all, including existing riders.

Enthusiastic Colorado Springs bicyclists can help the community recognize the importance of bike programs and infrastructure.

Over time, the City has demonstrated a commitment to improve and expand its bicycling environment. Several key events or initiatives mark a particularly positive change for bicycling in the City:

These efforts led to on-the-ground results: over the past two years, the City added 10 miles of on-street bike facilities in Colorado Springs, closing gaps in the existing bikeway network. Important trail crossings and connections were also added. COS Bikes! builds on these important efforts and capitalizes on the positive momentum for better bicycling.

What Needs to be Done?

Today, biking in Colorado Springs is primarily regarded as a recreational activity. There are many bicycle organizations, programs, and events in the city that focus on children and people who already bike for recreation or sport. While both groups are important to reach, the greatest potential for increased ridership is amongst the broader Colorado Springs population, for whom bicycling is not a popular way to get around.

Additional efforts are needed to expand the existing bicycle community and reach those who are interested in bicycling, but do not bike today. These efforts will also help normalize bicycling in Colorado Springs, building support for future bicycling projects and fostering mutual respect among all road users.

The city needs a comprehensive, connected, and high comfort bicycle network. Over half of the currently designated bike lane network and close to three-fourths of paved shoulders are on minor or principal arterials, streets with speeds and traffic volumes that are unlikely to appeal to a broad group of bicyclists, even with a bike lane.

The existing bicycle network is not fully connected. Beyond some of the trails, there are few long distance facilities and few continuous routes that connect neighborhoods. This limited connectivity is a barrier to attracting more bicycle riders, especially those wanting to ride for transportation/utility. In addition, the disconnected network is partly due to land use patterns and barriers posed by railroads, arterials, and Interstate 25. Bicycling today is a challenge because of the expansive city footprint with dispersed land uses.

The greatest opportunity for developing a connected network of comfortable bicycle facilities is by supplementing the trail network—the backbone of the city’s high comfort bicycle network—with facilities in the street right-of-way such as bike boulevards, bike lanes, separated bike lanes, and side paths (see Appendix B). This is a cost effective approach that allows for direct connections to destinations.

Ultimately, a full network of trails and on-street facilities will ensure that Colorado Springs residents will be able to access the whole city by bike; seamlessly biking to work, stores, trails, City services, parks, community centers, and other destinations. The recommendations in COS Bikes! support the need for better access to the trail networks via on-street facilities.

Street design and bicycle facility selection have a direct impact on safety and comfort. As demonstrated by public comments, crash analysis, and a comparison with national practices, the City’s existing street design standards do not result in comfortable streets for bicycling. Bicycle friendly street design standards will enable planners and engineers to more consistently provide comfortable bicycle facilities on all street types—considering which bicycle facility types are appropriate for which types of streets. In addition, the City needs other policies that support biking, such as a maintenance policy for trails and on-street facilities.

How We Developed the Plan

COS Bikes! is the culmination of more than a year of public and stakeholder engagement focused on Colorado Springs residents, community stakeholders, and City agencies. Their input shaped the recommendations. Highlights of the outreach are discussed in this section, and a full summary is included in Appendix C.

The following goals were used to develop the COS Bikes! recommendations. The Plan goals were developed collaboratively be the City, stakeholders, and public over the course of several meetings, workshops, and events.

During the data collection and information gathering phase of the project, a visioning workshop was held with a group of internal (City and partner agencies) and external stakeholders, including representatives from the U.S. Olympic Training Center, Downtown Partnership, Colorado College, Kids on Bikes, and United States Air Force Academy, among others. Participants identified common themes for biking in Colorado Springs, describing it currently as recreational, stressful, disconnected, and unsafe. In the future, however, people want biking to be safe, inclusive, integrated, convenient, and fun.

Stakeholders emphasized their desire for a Plan that is forward-thinking, to build political will and create a safe and connected network that is embraced by people of all ages and abilities. Input gathered during the visioning workshop directly informed the Plan’s vision statement and goals.

An online survey open to Colorado Springs residents between July and October 2016 provided a nuanced understanding of attitudes and preferences related to bicycling. The survey results showed that more than half of the 813 total respondents ride throughout the year and almost half reported riding three or more days per week. Eleven percent of respondents ride daily.

Respondents cited interactions with drivers, high traffic volume and speed, and a lack of safe routes as the strongest deterrents to bicycling. Such responses informed the Plan’s program, policy, and network recommendations.

To gather input from a broad Colorado Springs audience, the project team engaged with residents at community events. The input from these conversations informed the vision and goals for COS Bikes! For example, at the 2016 Legacy Loop Trailhead Expo event, over 50 people shared their visions for bicycling in the city. The common theme from their feedback is that people want a city that is connected, convenient, and accessible. At the 2016 Deerfield Hills Neighborhood Block Party, a community event with food, music, and entertainment, dozens of children told stories about bike riding and asked for biking to be fun, safe, and happy.

More than 250 people came to the May 2017 open house to learn about the project and provide ideas for improving bicycling in Colorado Springs. The team solicited input on corridors to incorporate into the Vision Network, and received feedback on potential program and policy recommendations.

Participants were given six voting dots to choose the programs and policies that would most improve the culture of biking in the city. Overwhelming support was shown for improved signage to improve orientation, bicycle route identification, and destination recognition (i.e., wayfinding), bicyclist and motorist education, creating a policy for street reconfigurations, and identifying geographic priorities across the city for Bike Master Plan implementation. Comments from the public emphasized the importance of education, trail access, wayfinding, and connectivity.

Along with the open house, the City received project feedback via email and the project website.

In November 2017, the City made the Draft COS Bikes! Plan available online for public review and comment. Between then and December 2017, the Draft Plan was presented to the Active Transportation Advisory Committee (ATAC) and the Citizen Transport Advisory Board (CTAB). The City reviewed all comments received (which are summarized in Appendix D) to produce COS Bikes!

The Plan process was guided by a Technical Advisory Committee (TAC) representing City departments, the Pikes Peak Area Council of Governments (PPACG), El Paso County, and the Active Transportation Advisory Committee (ATAC). The TAC met four times during the course of the project and provided valuable direction for the plan development process by: