The TOPS working committee recommended a proposal for the City to purchase 340 acres of open space land near the Mountain Shadows neighborhood.

“This acquisition would conserve the western backdrop of our skyline, provide continued protection of wildlife habitat, and offer incredible views and fascinating possibilities for future recreation,” said Britt Haley, design and development manager for the City of Colorado Springs.

The committee recommended the proposal on May 6, 2020 with a majority vote of 8 with 1 opposed and 1 abstention.

The process of potentially acquiring the open space is just beginning. It still needs to be considered by the Parks, Recreation and Cultural Services Advisory Board for recommendation to City Council. Residents will have a chance to give their input during the Parks Board meeting on May 14 and if and when it’s presented to City Council, the approving body.

Castle Concrete currently owns the parcels that make up the 340 acres. They are:

The quarry has been closed since 2015 and reclamation is largely complete. From a regional perspective, this property offers future potential to provide trail access to the Pike National Forest’s Waldo Canyon area once that area is ready to reopen to the public, which is pending finalization of an ongoing public planning process led by the U.S. Forest Service.

A frontage property of Pikeview Quarry

This parcel is 148 acres located between Blodgett Open Space and the Flying W Ranch. The acreage is not part of the quarry itself. It is grassland featuring rolling hills and oak brush.

In addition to the 340-acre acquisition currently being considered, Pikeview Quarry could be donated to the City by Castle Concrete. Castle Concrete would need to complete reclamation of the mine and gain state approval of the physical reclamation before the City accepts the donation. That process could take up to 10 years.

The quarry site has been identified as a potential future bike park.

The Parks Board will review the current 340-acre acquisition proposal at its May 14 meeting. The board is expected to decide whether or not to recommend the proposal to City Council for approval.

The $9.4 million acquisition would be funded by TOPS with assistance from acquisition partner The Conservation Fund.

TOPS is a voter-approved sales tax established in 1997 and amended in 2003 to extend through 2025 that is used exclusively to preserve open space lands, trails and parks. It generates approximately $9.5 million annually. The TOPS Working Committee is responsible for setting priorities and making recommendations for the expenditure of TOPS funds. 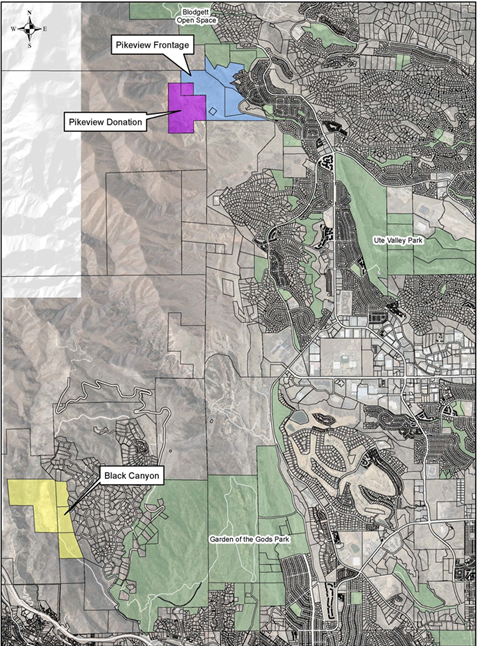