COLORADO SPRINGS, Colo. – Colorado Springs’ voters passed two ballot measures in the November election – 2B and 2C – that, respectively, allow the City to maintain $7 million of excess TABOR revenue for several key park initiatives and continue to make historic citywide roadway improvements. The parks, recreation and cultural service department will begin to use these 2B approved funds in 2020, with many projects utilizing funding from additional sources. The 2C ballot initiative will begin in 2021.

2B: funding for park improvements citywide

Norman Bulldog Coleman Community Park Master PlanA plan for the development of a portion of the city that contains proposed land uses, a generalized transportation system, and the relationship of the area included in the plan to surrounding property. 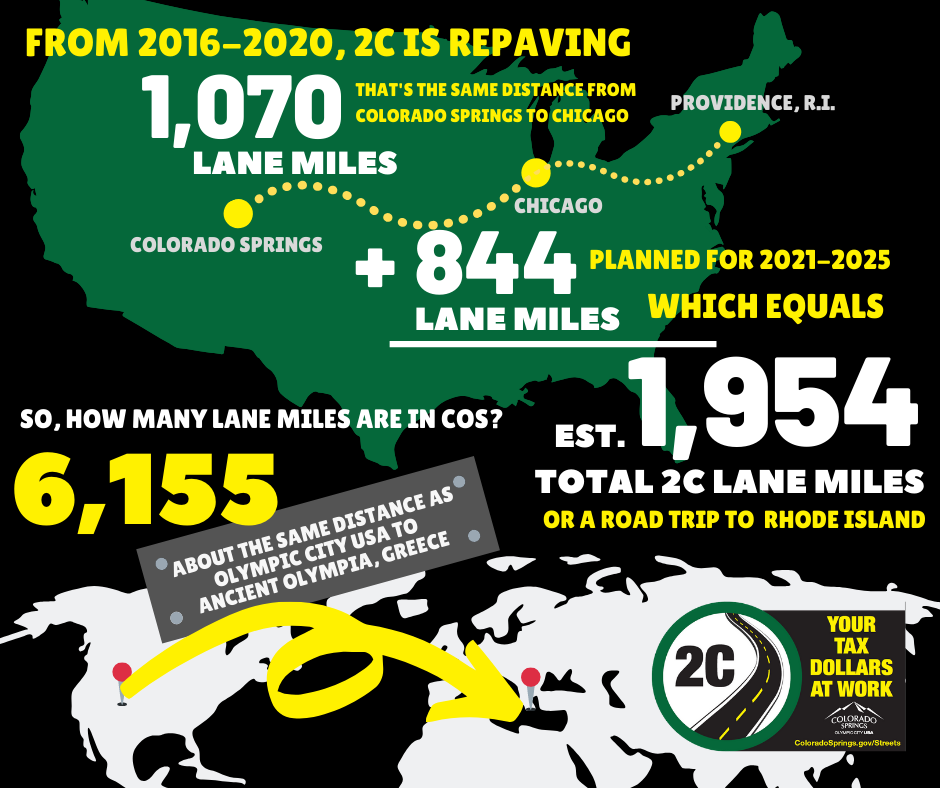 The strategy behind both editions has been to spread paving equally across the city, so that no area is neglected, and to target roads with an Overall Condition Index (OCI) rating of 30-70. By the end of 2025, 2C paving will have resurfaced approximately one-third of our city’s streets, which now totals 6,155 lane miles.

More on OCI: OCI ratings, used to indicate the general condition of pavement, range from 1-100 with one being the worst condition and 100 begin the best. Roads rated below 30 must be completely reconstructed. This work is funded as capital projects by the Pikes Peak Rural Transportation Authority (PPRTA), and recent examples of reconstructed roads include Rockrimmon Boulevard, Pikes Peak Avenue and Centennial Boulevard. Roads rated above 70 are still considered in good condition. These roads are treated with preventive maintenance, like chip seal and crack seal, to extend their lifespan. Preventive maintenance is also funded by PPRTA.

A major difference between the first and second editions of 2C is the type of roads that will be paved. The 2016-2020 2C paving list targeted main roads that impact a high volume of traffic. These roads, considered arterials and collectors, accounted for more than 75 percent of paving in the first five years of 2C. These are roads like Union Boulevard, Nevada Avenue, and Austin Bluffs Parkway.

While the 2021-2025 paving list will repave some arterials and collectors in need, the list is comprised of 501 lane miles of residential and local/industrial/commercial lane miles, which is about 57 percent of the roads slated to be paved. This means that neighborhood roads will be greatly impacted by the 2C extension.