We're gonna pave 1,000 miles, and we wanna pave even more 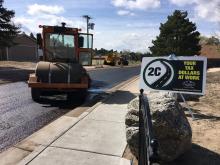 If you’ve driven around Colorado Springs at all in the last four years, chances are you’ve encountered a cone zone accompanied by a large sign declaring “2C, Your Tax Dollars at Work.” Stick around that spot long enough, and the deteriorated pavement under the cone zone is quickly replaced by a fresh layer of new asphalt, all made possible by 2C.
Learn a little more about the 2C initiative, including its history, the progress made so far, and what our roads would look like without this game-changing funding source.

We’ve made great progress in repairing our roads during the first three and a half years of 2C. We asked voters in 2015 to approve a 0.62 percent sales tax for five years. That works out to less than a penny for every dollar you spend that’s subject to sales tax. The money was dedicated exclusively to road improvements. At the time, we promised to pave 1,000 lane miles. We are happy to report that we’re on track to exceed that number.

We’re committed to extending the life of these repaved roads. That’s why we’re not simply adding a layer of asphalt. We are also replacing concrete curbs and gutters. Any flaws in concrete can result in water seeping under the new pavement. That results in damage to the new pavement and shortens its lifespan. Concrete work also includes sidewalks and pedestrian ramps, making the city more accessible for all.

How do we choose which streets to pave?

We made a conscious decision to spread all that paving out across the city, so that no area would be neglected. We’ve accomplished this by designating an equal number of lane miles for repaving in each of the City Council Districts. 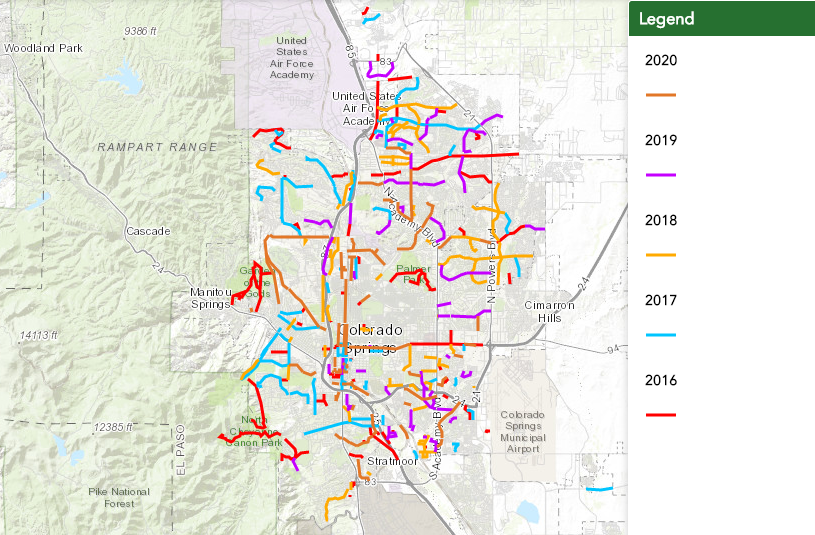 Streets were also selected for the 2C Paving List based on the following:

How much does all this cost?

We’ve made financial transparency a top priority. Anyone can track how much 2C revenue has come in and how much we’ve spent using our OpenBudget portal. The City collects approximately $50 million annually in 2C sales tax revenues.

Before 2C, our roads were neglected

For two decades, funding challenges decimated the Public Works department’s ability to provide regular maintenance on city streets. In the 1990’s a half-cent sales tax to fund infrastructure was eliminated. Then there were two significant downturns in revenue after 9/11 and during the great recession starting in 2008. Over that time, the cost of paving and concrete costs far outstripped inflation, and cities were required by the Americans with Disabilities Act to update concrete sidewalks and pedestrian ramps. By 2015, over 60 percent of our roads were in a state of rapid deterioration and less than 16 percent were rated “good” by the overall condition index. 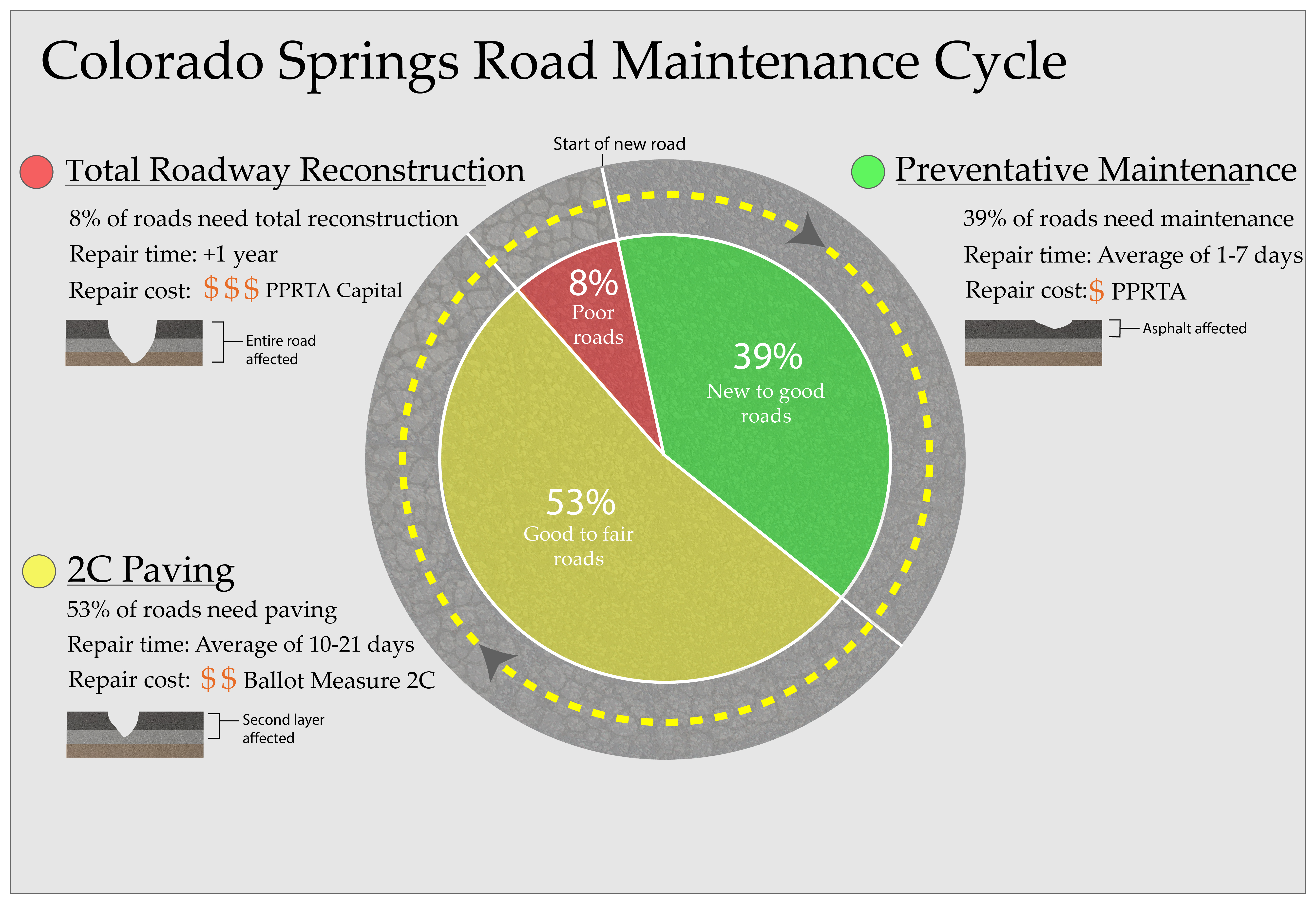 There’s more work to be done

The 1,000+ lane miles we expect to pave during the five years of 2C is a great start to repairing our roads, but with nearly 6,000 miles of roadway across the city, there is still a lot of work to be done. By the end of 2C in 2020, we will have addressed about 15 percent of our overall infrastructure, and it is projected that about 45 percent of streets will still need work.

If this dedicated funding source stops in 2020, however, it is projected that by 2025, our roads will deteriorate back to nearly the same state as 2015. Mayor Suthers and City Council have discussed asking voters to extend 2C at a reduced tax rate for another five years.
The graphs below illustrate road conditions before 2C (2015), at the end of the first five years of 2C (2020), and estimates for 2025, both with or without a 2C extension. 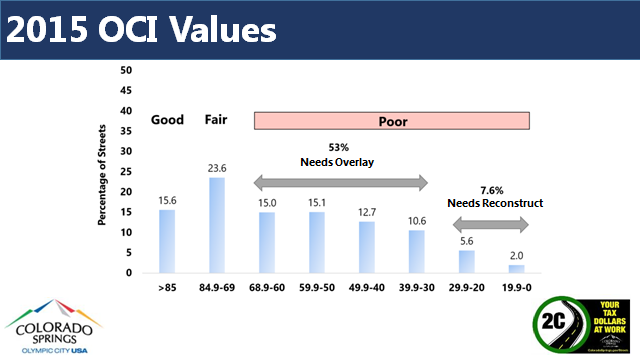 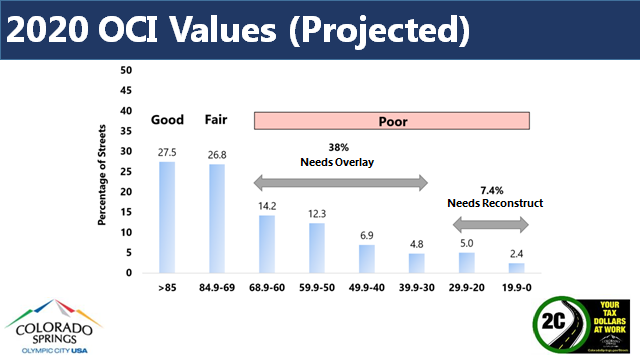 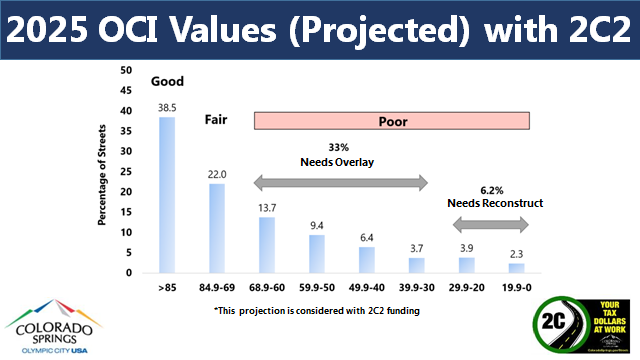 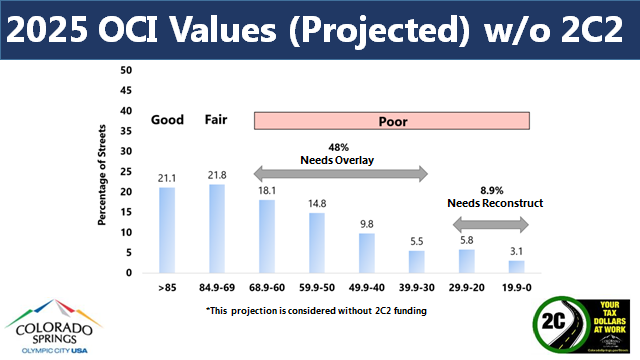 Repaving our roads does a lot more than make your drive around town smoother (although that is a WONDERFUL benefit!). Here are some of the other “bonus benefits” of the repaving that’s taken place with 2C funds.

Our roadway infrastructure has benefited greatly from 2C, which means anyone who has driven in a car in our City over the last three years has benefited from 2C. We are thankful to voters for approving this historic change, and we are committed to continuing the good work to keep our infrastructure well maintained for all who travel it.