As the planted vegetation becomes established over time, nearly all of the dam and reservoir will be covered with native grasses and shrubs to blend in with the natural landscape.

Because preserving the park’s iconic view while protecting it and downstream communities from flooding is a key goal, the project was designed to blend into the natural environment to the greatest extent possible. The flood mitigation facility will temporarily store a portion of the Camp Creek floodwaters during high flow events before releasing the water downstream at a lower flow rate over a period of time to reduce flooding. High flow events from burns scars carry large volumes of sediment. The facility includes an area to capture sediment, improving water quality before the water is released into the channel that runs through the park, Rock Ledge Ranch and the 31st Street corridor.

Reconstruction of Foothills and Dakota trails

Pavement on the Foothills Trail that runs along the eastern side of the detention facility, was significantly damaged by floodwater in 2015 forcing its closure. A narrow, temporary trail had been constructed near 30th Street to provide a detour around the damaged portion of the trail. The Foothills Trail, which was reconstructed in tandem with building the detention facility, once again serves as a popular connection for people on foot and bikes since its reopening in January.

The Dakota Trail, which was also damaged by floodwater in 2013 and 2015, was reconstructed over the southern edge of the project dam, restoring its connection to the Foothills Trail.

Properties to be removed from FEMA floodplain

With the facility complete, the next step is to request an update to the Federal Emergency Management Agency (FEMA) regulatory floodplain map to reflect the reduced risk of flooding. A map revision would remove about 110 properties along the 31st Street corridor from the floodplain that would allow those property owners the option to carry flood insurance at a reduced rate, but they would no longer be required by the federal government to carry flood insurance.

“We are excited to take this important step in addressing the increased flash flood risk along Camp Creek and to remove over 100 homes from potential risk. Several areas along Camp Creek have been at risk for flash flooding and construction of the flood mitigation facility and previous downstream channel stabilizations efforts have allowed us to make significant headway in our ongoing recovery efforts following the Waldo Canyon Fire in 2012,” said Engineering Manager Mike Chaves, City engineering division.

The Waldo Canyon Fire created an increased risk for flash flooding along Camp Creek and the North and South Douglas Creek watersheds. City officials worked to identify and obtain funding for flood mitigation efforts along both watersheds.  In the fall of 2013, the City of Colorado Springs launched the Camp Creek Drainage Improvement Project that involved significant neighborhood participation to thoughtfully plan short-term and long-term solutions to protect the Camp Creek corridor from flooding and erosion to improve public safety.  A FEMA Hazard Mitigation Grant paid for the majority of the cost of constructing the detention facility project.

The majority of the construction of the detention facility took place between June 2019 and March 2020, with planting efforts taking place over the last few months. 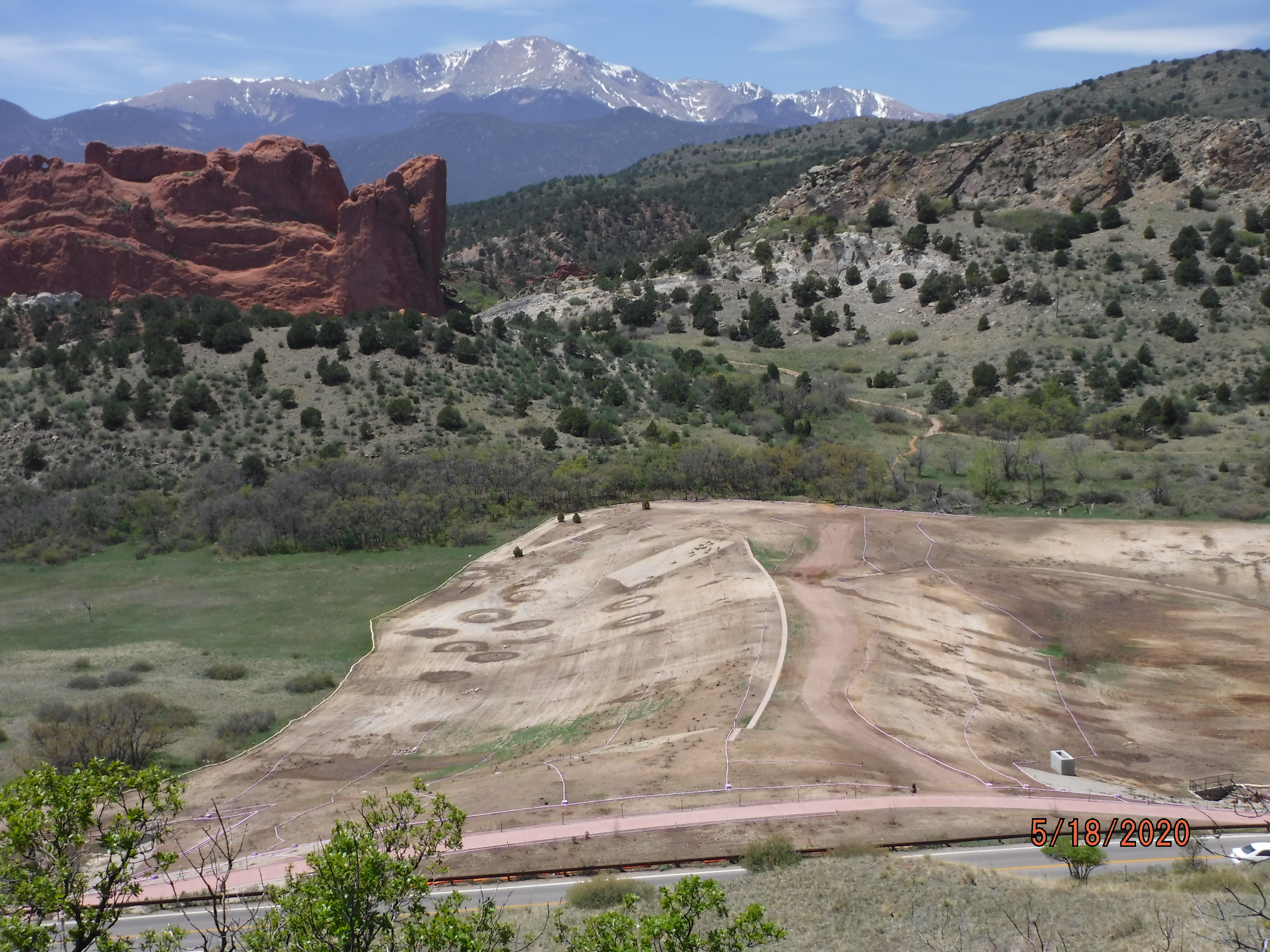 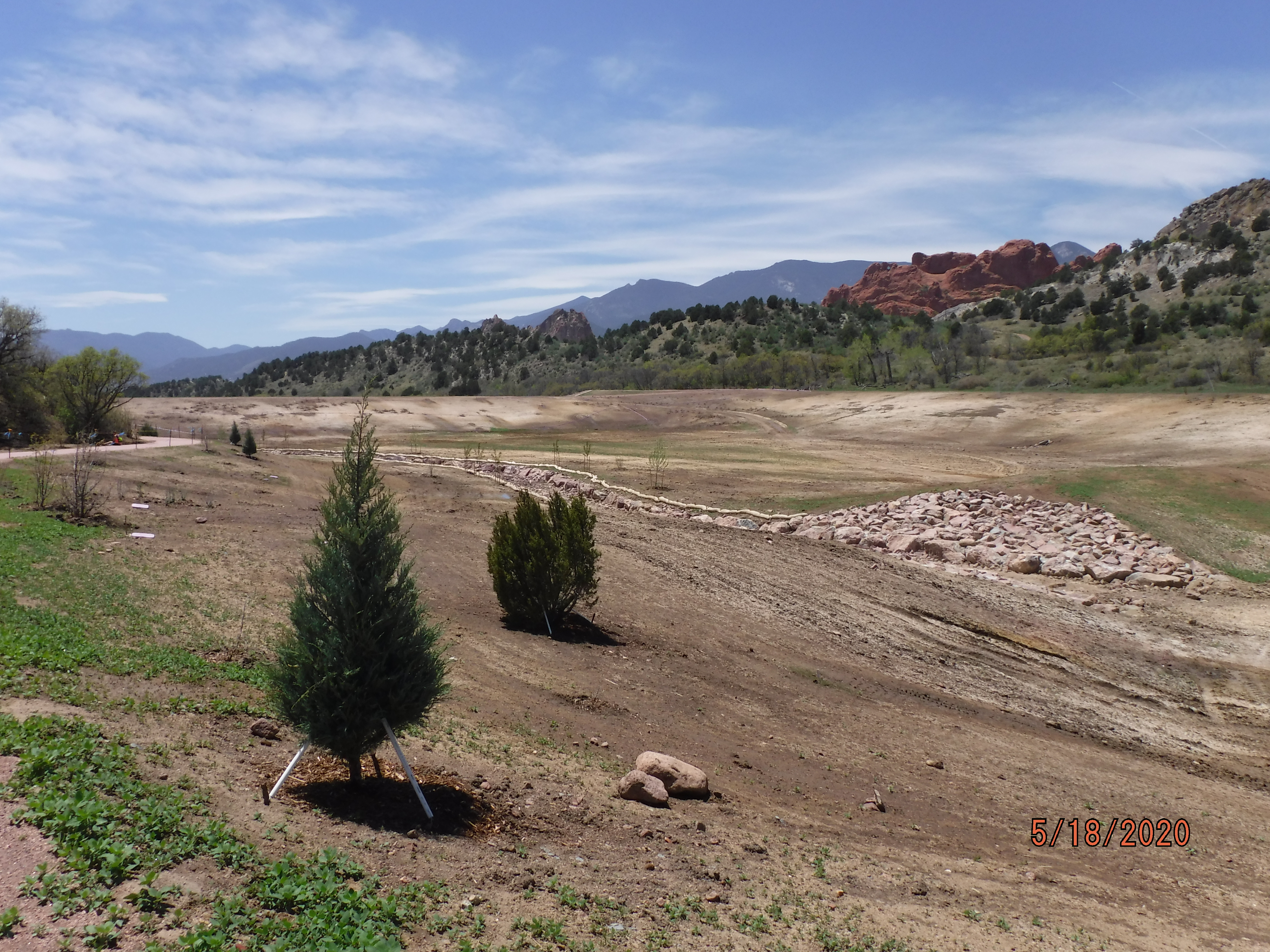