History of Transportation in Colorado Springs 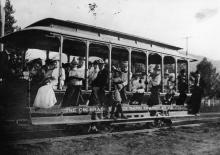 The first transportation company, The Colorado Springs & Manitou Street Railway Co., started operations in 1887 with horse-drawn streetcars that ran along Tejon Street to the Colorado College. Two years later a second rival company, the El Paso Rapid Transit Company built lines along Weber and Platte, and a year later, both lines merged. However, even after merging, the company struggled and that is when Winfield Stratton bought the company in 1901 knowing that transportation access was vital to the community.

In 1902 Stratton’s Colorado Springs Rapid Transit Railway began service with new electric streetcars, but unfortunately, Stratton died later that year. The estate trustees continued to operate the railway successfully, with a peak of ridership in 1911. During the depression usage started dropping and looking at rising costs, they replaced several lines with buses in 1926. In 1931 the company was once again sold and in 1932 the street cars were deemed inefficient and expensive and replaced entirely with buses and the name changed to the Colorado Springs Bus Company.

During World War II the company grew by serving Fort Carson and more buses were added to the fleet. After the war in 1946 the company was sold again, and the name changed to the Colorado Springs Transit Company. In 1952 fares raised to 15-cents, but the company continued to struggle and started advertising on buses and bus benches in 1959 to help with rising costs. Still, the company was losing money and asked The City of Colorado Springs to buy the bus company in 1961. The mayor set up a transportation committee, but they decided not to purchase the company.

Colorado Springs Transit Company was not alone in its financial struggles. Transportation companies were folding throughout the United States, leaving many areas with no public transportation. In 1962, President John F. Kennedy called for the establishment of a program for federal capital assistance for mass transportation. President Kennedy stated, "To conserve and enhance values in existing urban areas is essential. But at least as important are steps to promote economic efficiency and livability in areas of future development. Our national welfare therefore requires the provision of good urban transportation, with the properly balanced use of private vehicles and modern mass transport to help shape as well as serve urban growth." With that, the Urban Mass Transportation Act was created.

Kennedy did not live to see the bill become law, but President Lyndon Johnson carried Kennedy’s legacy on transit by signing the bill into law in 1964 stating, “We are a nation of travelers. You cannot write our history without devoting many chapters to the pony express, the stagecoach, the railroad, the automobile, the airplane. . . Yet, until 1964, the Federal Government did little or nothing to help the urban commuter.”

The new law changed transit rapidly. In 1966, The City of Pueblo took over their transit and Denver Tramway was purchased by The City of Denver in 1971. The same year the operator of what was then named the Colorado Springs Coach Company, informed city officials that they were losing money and would be discontinuing service and at that point the city sought federal funding to keep transit in Colorado Springs. 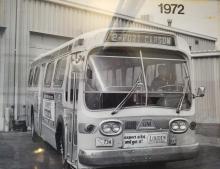 On August 8, 1972, a contract was signed by a company to manage the bus system for the city, and on September 16, 1972, the city took over operations of Colorado Springs Transit with 8 routes. The main terminal was a parking lot at the corner of Nevada and Pikes Peak Avenues. By 1976, there were 13 routes and the terminal, still used today, was opened at Kiowa Street and Nevada Avenue.

During the energy crisis in the 70s, ridership jumped to over a million passengers a year and by 1983, Springs Transit had 2,600,000 riders. More buses were ordered, and fares went up to 60-cents.

In 2004, voters in Colorado Springs and El Paso County approved a 1% sales tax to fund transportation projects and The Pikes Peak Rural Transportation Authority (PPRTA) was created. PPRTA funding helps pay for capital projects (55%), maintenance (35%), and transit (10%). In 2012, voters again voted to extend PPRTA funding for another 10 years and will be voting on a PPTRA extension again in November 2022.

2008 was a tough year for the country. The City of Colorado Springs faced huge revenue shortages, as a result MMT was forced to cut 50,000 hours of service. In 2009 cuts continued and all weekend and weekday evening service was eliminated. Many feared this was the end of public transportation in many places, including Colorado Springs. However, people continued to support having this service, and in 2012 services started to return, slowly, but surely.

After the recession all services, and even more, returned. Over 3-million riders were using MMT in 2018 and 2019, but all that slowed greatly in 2020 with the COVID-19 pandemic. Ridership fell below 2 million and bus routes and service were greatly cut once again. In 2021 there was also a driver shortage, making a post COVID comeback challenging.

In 2022 bus ridership started heading back up with an expected 2 million rides. Service was increased on most routes and 2 new routes were added. 4 new electric buses became part of the fleet that now has over 70 buses. RideMMT, a mobile app is now available for convenience. A new 72,000 square foot bus facility will be completed by the end of the year. Also new in 2022. The Zeb, a free shuttle serving the Downtown Colorado Springs area along Tejon St., taking almost the same route as the first horse-drawn trolley did in 1887!

There are a lot of other exciting prospects on the horizon for public transportation in Colorado Springs. A new downtown terminal, a front range rail station, more routes and service hours, and even more alternative fueled buses are all in the plans for the years to come! Who knows where we will be in the next 135 years!

Click on the image to view in .pdf format