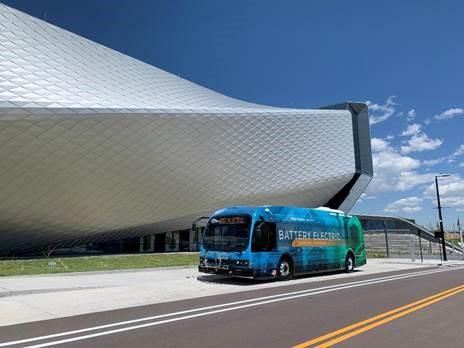 Downtown Colorado Springs is rapidly expanding. With the opening of the U.S. Olympic and Paralympic museum, two new sporting event venues, hotels, and urban living options, the City and key stakeholders identified a need for a Downtown Shuttle (DT Shuttle Analysis). The shuttle will provide an opportunity to connect activity centers, support improved quality of life, and enhance the overall character of the city. A comprehensive study, the Downtown Shuttle Analysis was done in 2019 to look at the feasibility of such an endeavor. The fare-free shuttle will run along Tejon Street from Cache La Poudre to W. Rio Grande Street, with 7 to 10-minute frequency.

The City is using a tiered approach for implementing the shuttle:

What is the downtown shuttle project?

The downtown shuttle project will provide fare-free bus service on Tejon Street in Downtown Colorado Springs, connecting residents and visitors alike to venues like Weidner field, the U.S. Olympic and Paralympic Museum, Robson Arena, Pioneer Museum and various shops and restaurants in between. The downtown shuttle will run at a high frequency to meet the needs of the public looking for a quick connection between the 100+ businesses and venues downtown, without having to hunt for parking or move their cars periodically.

How are you funding this project?

This project is being funded through a number of different sources.

When are you breaking ground?

DTS is anticipated to break ground in late 2021. The project will be completed in early to mid-2022 and service will begin in June 2022. There will be specific stops constructed downtown for picking and dropping off passengers. (Schedule for construction will be provided to stakeholders)

How will this project impact public safety?

DTS will enhance and improve public safety, because there will be less people driving around looking for a parking space which will make it safer for pedestrians. Less cars downtown means less congestion, hence improved air quality. This will allow for downtown employees to take the shuttle and keep their cars in a safe and secure location.

How will you manage other issues that arise from having higher traffic downtown?

The Downtown Partnership does daily cleanup so cleanliness will be of utmost importance. The buses are quiet, and eliminate the need to have dozens of cars downtown so traffic as well as noise and pollution levels will decrease rather than increase.

How is this different from the DASH service the city offered years ago?

The landscape of downtown has changed tremendously since we ran DASH. Downtown has grown, with major sporting and events venues peppering the city, in addition to a robust downtown residency, hotels, restaurants and businesses. This service will be more comprehensive than DASH was, with expanded service hours, increased frequency, and late night service on weekends.

DTS will operate like a regular route with front door boarding, requiring everyone to disembark at the end of the route.

The old buses were small shuttles that had a much smaller carrying capacity of about 10-12 passengers. The new buses will be able to carry more than double the amount of riders as the old shuttles did, and that number triples when you count standing passengers.

This service will start out utilizing clean diesel technology, and transition to electric buses which will be more sustainable.

How frequent is the service going to be?

Will this service require a regular bus ticket?

This service will be completely free to riders.

Tejon is intended to be a slow moving street, and is more of a destination and not a thruway. Bus will actually lower congestion by allowing more people on a bus and less cars. We will start by using clean diesel buses, and will transition to electric buses which are zero emission.