2B: Plans for park improvements thanks to voter-approved funding

The Parks, Recreation, and Cultural Services Department is implementing voter-approved park improvements citywide. The improvements are funded thanks to voter approval of ballot issue 2B in the November 2019 election, which allowed the City to keep $7 million in excess 2018 TABOR revenue

Browse below for a breakdown of projects the TABOR retention will help fund. Many of these projects will utilize additional funding from other sources.

About the parks: Thanks to city founder General William J. Palmer, there has been a vision for an interconnected park system for Colorado Springs since 1871. He wanted the city to become, “the most attractive place in the West for homes—a place for schools, colleges, literature, science, first-class newspapers and everything the above imply.”

Acacia, Antlers, and Alamo Square parks are some of Palmer’s earliest efforts to improve the quality of life for residents. They are also central to the City’s upcoming Sesquicentennial celebration in 2021.

Master plans for each of the three parks were approved by the Parks, Recreation & Cultural Services Advisory Board in 2020.

About the park: This community park primarily serves the central and west areas, but is a destination site for events, commuters and sports activities 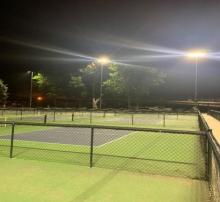 About the park: Located near north, central and eastern residents, Palmer Park serves the City as a regional park. One of the most frequent requests we hear from our residents and visitors is to improve trail signage to minimize confusion when navigating the park.

About the park: This community park is located at the corner of Dublin Blvd. and Rangewood Drive on the north side of the city. 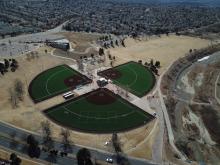 Artificial turf installed on the three softball fields at Cottonwood Creek Park; this is a cost and water-saving measure that will allow the lighted sports complex to be used for other sports, like soccer, without risk of compromising the field condition. It’s estimated that the conversion will save 2.8 million gallons of water annually. The sod from the fields was removed and replanted near the playground in Palmer Park.

About the park: Located near Fountain Blvd and Chelton Road on the city’s southeast side.

This project will address one of the worst parking lots in the City’s park system. This facility is heavily used by the South and Central community athletic teams and is part of the summer’s myriad of tournaments. The repairs will minimize hazards and provide a safer space for residents and visitors.

About the park: These two neighborhood parks serve the Central and West areas of our city

Work includes the construction of four tennis/pickleball courts. Boulder and Thorndale Parks were selected for court replacement based on community support and continued interest in these two neighborhood parks. 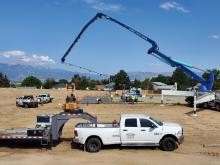 About the park: Construction is underway on a complete renovation at Panorama Park, a neighborhood park in southeast Colorado Springs. There has been great community investment in better connecting the park to the neighborhood, including new and improved amenities for all ages and abilities.

About the trails: These trails are located in the north, west and east/south areas of the city. The project also continues the efforts to connect the Legacy Loop. 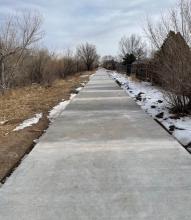 Existing asphalt was removed and replaced with concrete from Columbia to Uintah streets along the Shooks Run Trail corridor, a section of Legacy Loop. The new concrete trail is 10-feet wide with a 2-foot gravel running path on one side of the trail. The project also includes four new, ADA-compliant pedestrian ramps.

Two deteriorating asphalt segments of the Palmer-Mesa Trail were replaced with concrete. The section located parallel to 30th Street was approximately 1,300-feet long, and the section along Mesa Avenue was 155-feet long.

Part of the Sand Creek Trail, from the northernmost section of Wildflower Park to Nordic Drive, was improved by removing deteriorating asphalt and replacing it with concrete.

A stretch of failing asphalt on the Homestead Trail, from Barnes Road to Coneflower Lane was replaced with concrete.

About the locations: Fairview and Evergreen cemeteries are the oldest, continuously operated cemeteries in the city. In 1993, Evergreen was placed on the National Register of Historic Places, only the second cemetery in the state to receive this designation. Located in the south and western areas of the city, the cemeteries serve the entire community.

Norman Bulldog Coleman Community Park Master PlanA plan for the development of a portion of the city that contains proposed land uses, a generalized transportation system, and the relationship of the area included in the plan to surrounding property.

About the park: Coleman Park currently houses the Switchbacks and Vibes sports teams and allows for sporting activities and events.

Planned Improvements: This funding will give the community the opportunity to help plan this 70-acre community park in the eastern part of the city off Tutt Boulevard and Barnes Road. The master plan effort is underway with outreach opportunities starting in approximately May 2022. Visit ColoradoSprings.gov/colemanpark for details.