Pedal Our Past: Legacy Loop 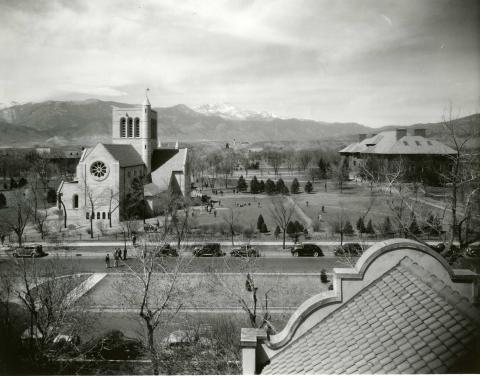 The Legacy Loop is the realization of General Palmer’s vision for a greenspace encircling the Downtown area. Points of interest span the first days of Colorado Springs to Olympic City USA.

General Palmer donated land along the railroad tracks and Monument Creek to the city for a park, which was thoughtfully designed and beautifully landscaped. It was a public space available to all citizens, the front door and pride of the city.  The park featured charming gardens, winding walks, and water features with picturesque bridges.  Unfortunately, the 1935 Memorial Day Flood washed most of it away, but the city quickly employed workers in Depression-era public works programs to rebuild.

The northern connector for the Legacy Loop crosses Monument Creek along the rail tracks for the old Chicago, Rock Island, and Pacific Railroad that connected Colorado Springs to Chicago in 1888.  The railyard and roundhouse are just west of here, where today the Pikes Peak Trolley Museum is located.  To encourage riding, the nonprofit Kids on Bikes worked with the city to fix this bridge connection, pave the path, add benches, and a bike repair station.

The trail you are on is the former railroad line for the Atchison, Topeka & Santa Fe Railroad.  This bike trail follows the Santa Fe route through town, where its depot is still located on East Pikes Peak Avenue.  The last train ran in 1971.  The Bon Shopping Center, Bonforte Park, and Bonnyville Neighborhood are post WWII, mid-century expansions of the historic core of Colorado Springs.

In 1924 the city built North, South, East, and West Middle Schools.   North and West still function as public schools, East has converted to Galileo Charter School, and South closed in 1982 and was demolished shortly after.  The name “North” refers to its location that in 1924 was on the north end of the city.

As a respected business owner and leader in the community, Leon Young was encouraged by many to run for City Council in 1973. Typically, Young worked tirelessly behind the scenes to “get things done for Colorado Springs,” but occasionally stepped into the spotlight to bring attention to troublesome issues facing our community. Among the issues he championed were improved funding for social services, equal opportunity in the municipal workforce, and a more civil and conscientious City Council. Young also spearheaded several neighborhood improvement projects in his district, including Shook’s Run, Hillside and Old Colorado City. In 1981, City Council unanimously appointed Leon Young to the post of Vice Mayor, a position he held for sixteen years. In 1997, after Mayor Bob Isaac stepped down as Mayor three months before his term ended, Young was sworn in as the Interim Mayor of Colorado Springs, becoming the first African American Mayor of the City.

The Out West newspaper was founded by General Palmer in 1872, a year after he founded the city. In its 149-year history, the Gazette took on five different names and four locations. The large white building due east of this point is the mid-century production facility for the Colorado Springs Gazette.  The paper was printed in this shop and the company headquarters were located here. Today the headquarters is downtown and printing is done in Denver, with newspapers shipped to Colorado Springs early each morning.

The Legacy Loop detours on Fountain Blvd here as the bike path along Shooks Run has not been completed all the way south to Fountain Creek.  As the city works to complete that segment, they are also working with Concrete Couch, a nonprofit that promotes the arts in the community and is an advocate for the homeless population.  Together they are working to create a citizen’s park, where all are welcome, in these unused lands to the south along the old railroad track.

Urban development is moving into the south downtown as restaurants, shops, and housing are built.  This is the Trolley Block, a district of restaurants and pubs housed in the building that was once the workshop where our streetcar trolleys were built and repaired, as seen in this 1906 photo.  Several new apartment projects are also visible in the area, including The Mae just to your west, as developers continue to invest in the historic downtown.  To your south are remnants of the historic working class Mill Street Neighborhood.

The Pikes Peak Greenway runs along Monument and Fountain Creeks from the Air Force Academy south to Fountain.   The stretch through town is part of the Legacy Loop.  Monument Creek flooded in 1935 and nearly every bridge in the city was destroyed, along with large parts of Monument Valley Park.  The wetlands just downstream from here are home to beavers and many waterfowl.

The Martin Drake power plant was built in 1968 on the previous site of the rail yard and workshops for the Colorado Springs & Cripple Creek Railroad and adjacent to the historic Municipal Light and Power Steam Plant, which opened in 1926. The plant burns coal to generate electricity for the city.  Because of the greenhouse gas emissions from coal power and the competitive costs of solar and wind energy, the plant will shut down in 2023, opening a vast expanse of land for development in the southwestern corner of downtown.

For over a century, the Conejos Neighborhood was home to generations of working class families. Platted in the 1880s as the “Monument Addition,” the four block long neighborhood was located south of Colorado Avenue, north of the Martin Drake Power Plant, east of Monument Creek, and west of the Denver and Rio Grande Railroad tracks.

Long ignored, the area eventually suffered from blight, neglect, and indifference, and was torn down and replaced with America the Beautiful Park. Today, the only original building still standing is the historic Spanish Gospel Mission, now known as Chadbourn Community Church. However, as one former resident shared, “…although the neighborhood no longer exists, the spirit and memories of Conejos live within us.”

Organized in May 1871, the Colorado Springs Company was the brainchild of Civil War general and postwar railroad developer William Jackson Palmer. Bringing his Denver and Rio Grande Railroad line here, he and the company positioned the 2,000-acre townsite for a boom, making “Fountain Colony” one of the more successful railroad colonies.

Irrigation being essential, the company designed, dug, and operated the El Paso Canal and irrigation ditches, augmented by wells, in 1872, gardens encouraged. General Palmer insisted on wide, tree-lined streets. It should be a “City of Trees” and the streets should have electric streetcars. Thus, the company advertised on February 1, 1873: “Trees wanted!” They must be “5,000 young, round-leafed cottonwoods with plenty of roots.”

From the beginning, we were a college town. In 1871, officials set aside 20 acres for a “college reservation.” Three years later, the first classes of coeducational Colorado College were held. In 1882, male students formed an athletic association and played football games against local volunteer firefighters. In 1885, CC defeated Denver University 12-0 in the first intercollegiate football game in the west. Today, the private liberal arts college draws students from around the world to their innovative block plan. 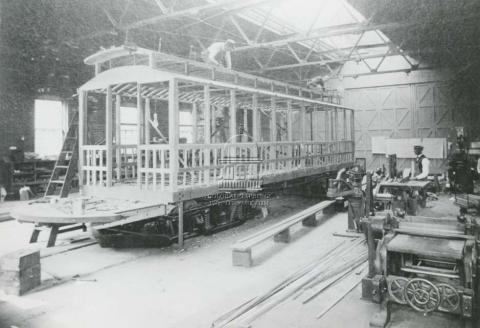