Colorado Springs has long held the international reputation of being one of the greatest health and pleasure resorts in the world. Already a renowned destination for people with pulmonary diseases, it was coined the “City of Sunshine” for its reputation as a dry climate perfect for treating tuberculosis patients. From the 1880s through the 1940s, tuberculosis treatment was the community’s major industry, and a chief destination for those with the disease is what is now known as Peregrine neighborhood

In 1907, a fraternal life insurance organization called the Modern Woodmen of America selected Colorado Springs as the site for a tuberculosis sanatorium to serve their large and growing membership. 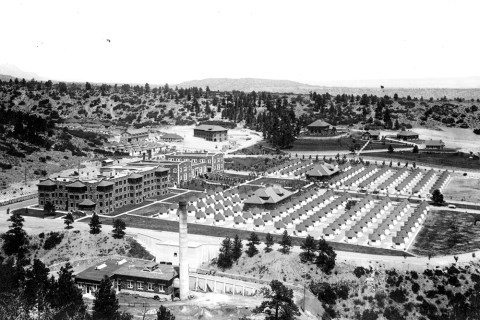 With encouragement from the Chamber of Commerce, the company purchased the 1,000-acre Ambler Ranch located twelve miles northwest of downtown- now the Peregrine neighborhood. Welcoming its first patients on January 1, 1909, the Modern Woodmen of America Sanatorium was a self-contained community with its own hospital, residential facilities, powerhouse, dairy, farmland, and railroad station. In time, the sanatorium would grow to include over 220 separate buildings. An annual 10-cent fee paid by all Woodmen members funded the operation.

Woodmen Sanatorium was the largest in the Pikes Peak region, serving  more than 12,000 patients, over 39 years with a claim that 80% of its patients were either cured or greatly improved by the treatment. 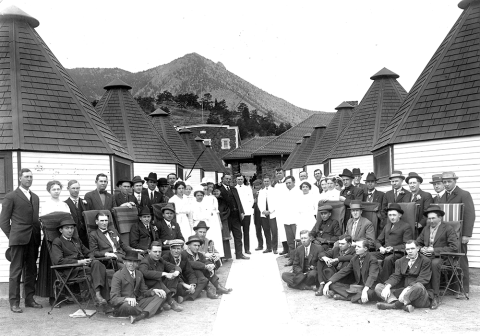 The sanatorium’s regimen of fresh air, sunshine, and lots of food was made obsolete by drug treatments discovered during World War II. Physicians discharged the last patient in 1947. The site was purchased by financier Blevins Davis who donated the hospital grounds to the Sisters of St. Francis Seraph, which still uses the site as a retreat, conference, and nursing facility. The iconic wooden TB huts that once dotted the grounds were sold off to anyone who wished to haul them away, but many can still be seen in the area and around the community. The great expanse of farm fields and pastures that once surrounded it has now been redeveloped for homes, roads, parks, and Woodmen-Roberts Elementary. Echoes of this history can be heard in the names of Woodmen Road and Woodmen Valley.

Today, Peregrine is a quiet hillside neighborhood nestled in the Northwest corner of Colorado Springs just south of the Air Force Academy and east of Blodgett Peak Open Space.