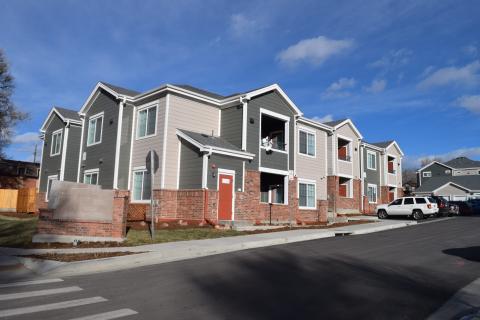 Last November the Shook’s Run Apartments were completed, providing 40 much needed affordable housing units to low-income families. The 1, 2 and 3-bedroom units were developed by the Colorado Springs Housing Authority and supported in part by the City of Colorado Springs with HOME Investment Partnership funds, a grant program from the U.S. Department of Housing and Urban Development.

One of the first families to move in was Jessica and her young son. Jessica said she spent two decades trying to escape from the violent and traumatic cult that she was born into, but escaping was just the first step.

Along with the responsibility of taking care of her young son, Jessica was tasked with finding a home she could afford while also recently being diagnosed with a dissociative identity disorder.

“I had to deal with getting this new diagnosis and working through my past so I can recover from it,” Jessica said.

After months of being homeless, Jessica and her son were staying in a family-shelter provided by Family Promise, a non-profit focused on ending the crisis of family homelessness through prevention, shelter and stabilization. Family Promise also worked with Jessica to help build her savings and find possible housing locations.

After what felt like an eternity, Jessica got the call that there was a rent-controlled apartment available for her in the newly built Shooks Run Apartments.

“I'm glad that I was able to get into an income-restricted apartment because I'm on disability,” Jessica said. “To be able to be in this space has changed my life. I wouldn't have been able to get to where I am right now, where I can afford to take care of this apartment and I'm adulting effectively and I'm healing. The last year and a half has been a big 360 degree change in my life and the organizations in this city really helped make that possible, to make that transition smoother and easier.”

According to the Executive Director of Family Promise Crystal Karr, Shooks Run has been a lifesaver to the community, providing housing to families that wouldn’t be able to afford it otherwise.

“The reality of our housing crisis is pretty dire right now, especially when you look at what minimum wage is and that you need to make a minimum of $25 an hour to afford a $1,500 apartment, which is the going rate for a two-bedroom right now,” Karr said. “Most people don't make $25 an hour or more, and it is even more difficult if you have kids and you're a single parent.”

The stability of the apartment has finally allowed Jessica to plan for the future in a way she never could before.

“I feel proud to be able to have a home, to walk through that door to use my kitchen and have a full fridge,” Jessica said. “I don't think there were words to describe how this experience has affected me in such a good way.”

While many have a hard time understanding the difficulties of growing up in a cult, or misunderstand the challenges of having multiple personality, Jessica said knows that she is not alone in her situation. She hopes to become a peer counselor someday to help those looking for the same stability that she had been able to transition into.

“For anyone else who is struggling with a mental handicap at the hand of someone else, just remember, if you were able to survive the trauma, you will also be able to survive the healing,” Jessica said. “You can get yourself to a place that you want to be. It doesn’t happen right away so just don't give up. Keep going.”