It’s July 31, 1871, and you’re standing in what will eventually become downtown Colorado Springs. Aside from the aspens and evergreens lining the distant foothills, there’s not a tree in immediate sight. Dry grasses, yucca, cacti and an occasional scrub oak are scattered across the arid plain, but, mostly, the land is a dusty, blank canvas set in front of the majesty that is a snowcapped Pikes Peak. 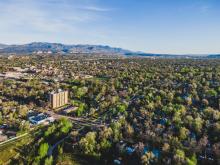 This is the landscape that General William Jackson Palmer, the founder of Colorado Springs, first envisioned as a “famous summer resort.”

Today, 150 years from the city’s founding, things look quite a bit different. The city is now dominated by office buildings and homes, roads and restaurants, traffic lights and schools, all accommodating a growing population of nearly 700,000 residents in and around Colorado Springs.

This urban forest canopy shades over 17% of the community and provides economic, environmental, and aesthetic benefits: $100 million annually in air filtration, $900,000 in stormwater retention, $2 million in carbon sequestration, and incalculable moments of beauty and serenity.

To understand how the city’s treescape has transformed over the last century and a half, you need to know a little bit about its founder.

Palmer was born on a farm in Delaware, but grew up in southeastern Pennsylvania, which is Latin for “Penn’s Woods.” At a young age, he developed an early fascination for trains, which led to his employment by the Pennsylvania Railroad (PRR).

“We know from Palmer’s letters that he loved nothing better than to ride on horseback through the forests of the Allegheny Mountains while scouting railroad routes,” said Leah Witherow, Colorado Springs Pioneers Museum curator. “He found a spiritual connection among the trees and mountains and thought access to nature was essential to your mind, body and soul.”

While working for the PRR, he suggested trains should burn coal and not wood, which was running out in some areas. The Pennsylvania Railroad became the first to switch to coal. From these roots, Palmer became a civil engineer, Civil War general, railroad magnate, and philanthropist.

When Palmer founded Colorado Springs in 1871, at age 35, he famously said, “My theory for this place is that it should be made the most attractive place for homes in the west – a place for schools, colleges, literature, science, first class newspapers and everything that the above imply.”

This vision was from a Philadelphia-grown man who had frequent business in London and New York, cities distinguished by their incorporation of urban trees. He understood that for Colorado Springs to fulfill its own potential, its natural beauty would need to be preserved and cultivated at the same pace as its industrial ambitions.

This commitment was consistent with Palmer's conservationist values and horticultural interest. His beliefs affected both business dealings and personal projects. While building his home at Glen Eyrie, right near Garden of the Gods Park, he had plans redrawn to avoid moving trees and native vegetation. Many proposed railroad lines were moved to accommodate the natural surroundings.

Palmer was also interested in the health and propagation of trees throughout the young city. In 1872, he spent his own money to have 600 cottonwoods shipped in by rail and planted along Monument Valley Creek. He even collaborated with well-known forester and fellow Pennsylvanian Gifford Pinchot about control methods for potential threats to the city’s young urban forest, including pine beetles.

Entrusted with protecting the city’s living infrastructure and cultivating a thriving urban forest is the city’s Forestry Division.

“Our urban forest is the result of a 150-year sustained effort by the City and the people who live here,” said Dennis Will, city forester. “The City forestry department is the steward of that sustained effort, and it’s a responsibility we take very seriously.”

The division includes a total of 15 people and three seasonal contractors. . Together, they care for approximately 300,000 street trees and 50,000 park trees. They also maintain trees on other City property, including open spaces.

This care includes planting, pruning and treating trees affected by insects and disease. It also includes the removal of public trees, when needed, as well as mowing and weed control in medians and other public rights of way.

The team works with residents daily, and on average receives approximately 2,000 requests regarding street tree maintenance each year.

Another important role of Forestry is supporting the nearly 10,000 acres of open space that contain both deciduous and coniferous forest. With the majority of this forestland located in the wildland urban interface, the forestry division regularly partners with Colorado Springs Utilities and the Colorado Springs Fire Department to promote tree health, reduce the risk of wildfire, and encourage species diversity. Together, they have treated more than 1,000 acres since 2005.

All of this, combined, cements the city’s long-standing history as a Tree City USA, a recognition Colorado Springs first received from the Arbor Day Foundation in 1977. Colorado Springs is actually the longest-running Tree City USA in the state of Colorado, and one of the first cities nationwide to be recognized by the program, which began in 1976.

These roots were planted, literally, by our city’s founder, and we are proud to continue this tree legacy today through strategic forestry practices, working with and educating residents, and thoughtful planning for the future of our urban forest.

Our legacy of trees is 150 years old and still growing.