Office of the City Council and Legislative Services 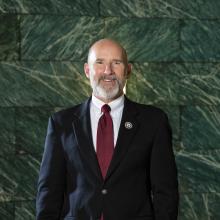 Dave brings the leadership of an Army Officer, the problem-solving approach of a Green Beret, and the business experience of a Clinic Director to Colorado Springs City Council.

Dave and his wife Holly moved to Colorado Springs 30 years ago.  They have lived in District 1 for the last 22 years.  They raised their two children in Colorado Springs.  The children are grown and out of the house, but they now have a rescue Miniature Schnauzer (Heinz) who gets spoiled more than the children ever did.

Dave served his country for 21 years in the US Army - first in Military Intelligence as a Russian Linguist, then in the Green Berets as a Special Forces Medical Sergeant, and finally as a Commissioned Officer and Physician Assistant.  He is an Iraq War veteran with three one-year deployments to Iraq.  He also served one year in the Republic of Korea (where he was on 9/11), and six months at the US Embassy in Kazakhstan (among other deployments).  He retired from the Army in 2010 after reaching the rank of Major.

After retiring from the Army, Dave continued to serve the citizens of Colorado Springs as a Physician Assistant at Peterson AFB Flight Medicine, then a small Urgent Care, and finally as the Center Director for a Men’s Health Clinic.  In this final position his focus on customer service and understanding of small business success led to dramatic increase in patients (customers) enrolled.

Dave has a BA in Political Science from the University of New Mexico, and a BS in Physician Assistant Studies from the University of Nebraska School of Medicine.  He has also been a Paramedic and a Wilderness Guard.   He is a member of the Special Forces Association, Pikes Peak Road Runners, and Knights of Columbus (among other organizations).  He and his wife Holly are members of Corpus Christi Catholic Church.