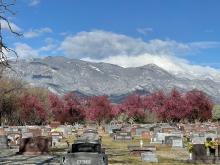 The Union Printers Home Foundation is transferring 429 cemetery spaces to Evergreen Cemetery. The Union Printers Home opened in 1892 as the world's largest tuberculosis care facility, treating over 25,000 patients. The facility purchased nearly 1,500 spaces in Evergreen Cemetery for their residents and more than 1,000 of its residents are buried there. This transfer provides families the opportunity to purchase spaces in the oldest section of the cemetery, which until now, was nearly sold out.


“The Foundation’s relationship with the City of Colorado Springs, its residents, and Evergreen Cemetery dates back 130 years, and it is only befitting that we recognize, and honor, our rich history together. On behalf of The Union Printers Home Foundation, we’re not only proud, but humbled, to be able to make this transfer to the City of Colorado Springs and Evergreen Cemetery,” stated Dan Wasser, President of the Foundation.

The 429 cemetery spaces will now belong to Evergreen Cemetery, which was established shortly after Colorado Springs was founded in 1871. Evergreen was deeded to the city in 1875 by city founder General William Jackson Palmer. The original 10 acres has grown to over 220, with more than 90,000 burials. Many of the city’s pioneers are buried at Evergreen Cemetery, including American prospector and philanthropist Winfield Scott Stratton, poet Helen Hunt Jackson, and General William Jackson Palmer. In 1993, Evergreen became only the second cemetery in the state to be placed on the National Register of Historic Places. For more information about the city’s cemeteries, visit ColoradoSprings.gov/Cemeteries.