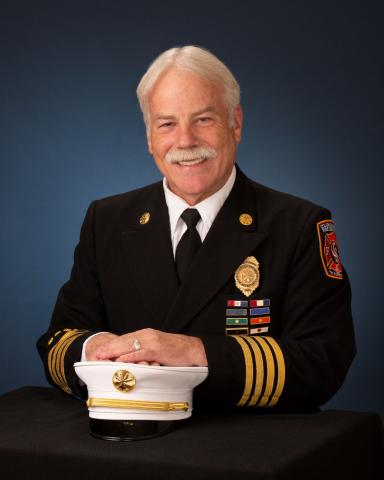 “Randy’s leadership and tremendous work throughout his 34 years with the Colorado Springs Fire Department, have prepared him to lead the department on its continued path of excellence,” said Mayor John Suthers. “Randy understands the unique needs of our community, and his experience includes leadership roles during the Waldo Canyon and Black Forest fires. We had several great candidates from across the country, but ultimately we chose to select a highly-qualified, long-time member of our community. I’m very happy to announce that Deputy Chief Randy Royal will serve as the next Colorado Springs Fire Chief.”

Chief Royal will oversee a department of 539 sworn and civilian positions and 22 fire stations. He has worked in emergency services for over 42 years (28 as a paramedic). Chief Royal has served in a Chief Officer role for 16 years, as a Battalion Chief, Shift Commander and Deputy Chief.  He graduated from Flagler College and has regularly attended the National Fire Academy receiving the Executive Fire Officer designation.  He also has earned the Center of Public Safety Excellence’s designation as a Chief Fire Officer.  During his career, he has been involved with of the initiation of the Tactical Emergency Medical Program, worked in the early Hazmat and Tox-medic Programs, managed the Medical Division, and presently leads the Pandemic Taskforce.

“I am honored to have been chosen by the mayor to fill the position of Fire Chief for the CSFD,” said Randy Royal. “I believe the CSFD is one of the best fire departments in the nation, with excellent staff that are willing to go above and beyond to serve our residents and visitors. I am proud to have called Colorado Springs my home for over 40 years, and I am excited to be able to work for our community at this level and to continue to look for ways to uphold and enhance our public safety efforts each and every day.”

Outgoing Fire Chief Ted Collas said, “It has been my honor to serve Colorado Springs as a firefighter for the past 36 years.  I have truly been blessed to work with some of the best people in the world during that time.  One of those great people is Randy Royal.  Randy has been a trusted colleague and friend, and it gives me great comfort and assurance to see him stepping into the role of Fire Chief for this great city.  Chief Royal is highly regarded by the men and women of our department, as well as fire service leaders around the country.”

A nationwide search was conducted, and 37 candidates applied. After a video interview screening process, five candidates were interviewed by the mayor’s selection panel. The panel consisted of the mayor, chief of staff, chief human resources and risk officer, and two city council members.