COLORADO SPRINGS, Colo. – Launched in 2015 to celebrate the outstanding achievements of young professionals age 40 and under, a record number of nominations were received during the nomination period (Aug. 11-30). 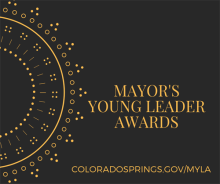 Of the nominees, 27 finalists have emerged across five categories. The finalists, who all live or work in Colorado Springs, are as follows:

One winner from each category will be announced during an award ceremony on Thursday, Oct. 28 from 4-6 p.m. at the 3E’s Comedy Club, 1 S. Nevada Avenue. A special “Military Young Leader Community Impact Award” winner will also be announced.

The ceremony will be emceed by Fox21 Morning News meteorologist Matt Meister. A livestream will be offered on the Mayor’s Facebook page (@MayorOfCOS).

For more information on the Mayor’s Young Leader Awards, including a list of past recipients and a description of each award category, visit ColoradoSprings.gov/MYLA.