The eastbound and westbound lanes of Circle Drive east of Interstate-25, between Janitell Road to the south and Monterey Road to the north, are carried on a total of four bridges consisting of two sets of twin structures. At more than 800 feet long in total and 60 feet above Fountain Creek, the structures carry two lanes of traffic in both directions. They span over Fountain Creek, the Burlington Northern Santa Fe Railroad, the FMIC (Irrigation), Las Vegas Street, Hancock Expressway, and the Pikes Peak Greenway Trail.

The Circle Drive Bridges were originally built in 1963. Over the past several years the City has used available funding toward rehabilitation to keep these bridges in service. As they have exceeded their 50-year service life, the City initiated a study to determine if the bridges should be rehabilitated or replaced.

Phase I: Rehab or Replace?

The first objective of the study was to identify the best rehabilitation and replacement solutions that will result in the longest life for the bridges. Each option needed to meet current design requirements while incorporating both initial construction costs and long-term operations and maintenance costs. These two alternatives were then compared against one another to determine which solution is the best long-term investment for the City of Colorado Springs. This analysis took place in 2018. 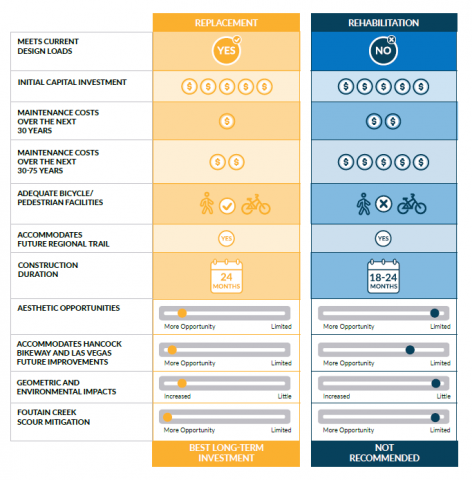 After several in-depth analyses during Phase 1, an evaluation of initial capital and a review of overall life-cycle costs, the City determined that replacing the bridges is the best solution. Given the extensive degradation of the existing structures, the rehabilitation option would be more expensive while not fully providing for the desired structural capacity.  Based on their current condition, and as the bridges have exceeded their 50-year service life, a design process for a complete replacement of the bridges is now underway.

The project team is working to further evaluate the span configuration, identify roadway typical section and traffic phasing, and develop a cost-effective design that will facilitate a successful replacement. We want to make sure that the new bridges perform better and are safer for the community.  Funding for the project design is included as a “Priority A” capital project under the Pikes Peak Rural Transportation Authority (PPRTA).

The final design of the new bridges is expected to be completed between late 2020 and early 2021.  Construction start is yet to be determined, but once started it is anticipated to last approximately two years.  During this time, the public may experience traffic impacts, such as detours, lane shifts and minimized speeds.

Sign-up for the latest project information and notices of the public meeting by sending an email requesting to be added to the project database to Carolyn@bachmanpr.com 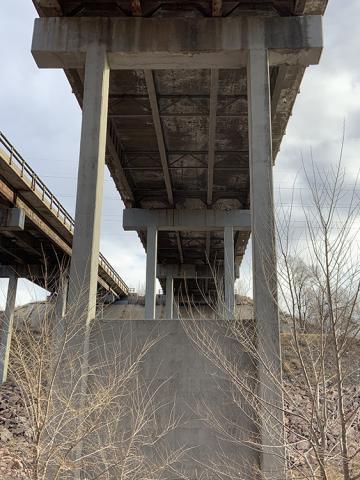 Through the Circle Drive Bridges Student Ambassador Program, the project team is working with students from Harrison High School to inform the public and obtain input that will result in a better overall project reflective of the needs and desires of the community. The student ambassadors are educating the community about the project and gathering feedback while being introduced to the planning and design process.

The student ambassadors have volunteered to be part of this program due to their interest in road construction, engineering and public communications. They have spent time with the project team touring the project site and visiting with the engineers to learn about the project.

Most recently, the students participated in a field trip to empower the students who have shown interest in creating an art installation on the Circle Drive bridges as part of their legacy on the project. During the field trip, they toured different art installations to understand the different mediums of public art. From tile to murals to sculptures, students gained inspiration from a variety of artists. After exploring the public art scene, students learned more about the process of creating public art. The student ambassadors will begin to form their idea further and begin planning efforts later this year.