In 2018 with the strong interest in the downtown corridor and significant investments occurring within the area, the City felt it was the right time to issue a Request for Propsal (RFP), seeking qualified organizations interested in entering into an agreement or partnership for the full use and programming of the City Auditorium. The City envisioned a revitalized and renovated facility viewed as an essential asset to downtown. Responders were encouraged to submit proposals offering a balance of creativity and financial feasibility.

After a significant review process and a pause during the height of the COVID-19 pandemic in 2020, the City selected the proposal submitted by the Colorado Springs Community Cultural Collective at City Auditorium (CSCCC) as the highest ranked offer. The CSCCC has identified a gap for performance venues suitable to smaller cultural organizations in need of affordable mid-size venues and creative workspaces, a role which a revitalized City Auditorium could fill. As such, the CSCCC proposal includes making significant repairs and renovations to the building while also improving and expanding its functionality to be a better host for arts and culture, education and community activities and events.

About the Memorandum of Understanding

As of Sept. 1, 2021, the City has an MOU in place with the CSCCC to determine the viability of its proposal to renovate and operate the City Auditorium as submitted through the RFP process. On Dec. 7, 2022, the City and the CSCCC signed a second amendment granting the CSCCC three years to complete the tasks outlined in the agreement. No specific terms have been identified and no agreements will be developed until the MOU has been completed and the due diligence requirements are considered successfully met. Among the requirements for the CSCCC to deliver to the City are proof of funding, a feasibility study, and facility management throughout the due diligence period.

The CSCCC is a 501(c)(3) dedicated to the reimagining, operation, and development of the City Auditorium. The CSCCC has proposed that the City Auditorium, located at 221 East Kiowa Street would be renovated and revitalized for arts and culture, education and related community activities and events.

The mission of the CSCCC is to create a city center affording access to all residents for the purposes of relevant, inspired, and thoughtful works of the human spirit that will preserve the history and public use of the City Auditorium. Its vision is “A collective of education, arts, culture and business community, ‘for the use of the people and the glory of the city.’”

The CSCCC has and continues to engage stakeholders and the general public in an outreach process to ensure community awareness of the project.

To view a recap of the information provided at these meetings, visit the Community Cultural Collective website.

View materials from a Nov. 10, 2022 presentation from the CSCCC to the Parks, Recreation and Cultural Services Advisory Board.

The City Auditorium is the culmination of community-driven efforts to create a large, multi-purpose meeting and entertainment facility for the City of Colorado Springs. In 1922, the City approved the construction of such a building, and, in 1923, the building was completed and opened to the public. As a joint effort among three prominent local architects, Thomas MacLaren, Charles E. Thomas, and Thomas Hetherington, the Auditorium was intended to be an example of local architecture and a testament to the community of Colorado Springs. The building’s total construction cost reached just over $424,000.

The structure itself is large, with overall dimensions of 226 feet by 160 feet with a main floor footprint area of 28,500 square feet, not including the sub-grade boiler room and original coal storage area.  The building encompasses over 40,000 square feet on its many levels and houses not only the main arena space that can seat up to 2,400, but also the Lon Chaney Theatre which seats about 235.  Originally, the Auditorium had several additional meeting rooms, which have now been converted to office, restroom and snack bar uses. The stage area has a full overhead fly area that rises to over 50 feet above the stage. It also has dock storage and basement-level dressing rooms.

Two events served to enhance the building’s original design. In the 1930s, during the Great Depression, the New Deal Works Progress Administration (WPA) administered several mural painting campaigns across the country. Within the lobby of the Auditorium, at either end above the box office windows, two WPA murals were painted by two Broadmoor Academy artists.  Archie Musick’s mural depicts the grueling work of mining, while Tabor Utley’s celebrates the arts, which was possible in part due to the community wealth brought about by mining. These murals exist to this day and were restored in 2003.

In 1976, a Mighty Wurlitzer Theatre Pipe Organ, constructed in 1928, was removed from its original location in the Burns Opera House, which was being demolished, and installed in the Auditorium. The Auditorium, which originally was designed to accommodate such an instrument, has utilized the organ since its installation for a wide variety of events, including weekly lunchtime recitals to accompanying the screenings of silent films. This original Wurlitzer Opus is the last remaining original Colorado Springs Theatre Pipe Organ and is maintained in nearly perfect condition. The organ is known across the United States and has been played by many of the top theatre organists in the country.

A Timeline of the City Auditorium

1934 – Two murals added, under the Public Works of Art project, one of Franklin Roosevelt's New Deal programs during the Great Depression. Both artists, Archie Musick and Tabor Utley, were associated with the Broadmoor Art Academy (later part of the Colorado Springs Fine Arts Center).

1993 – Potential conversion to a municipal court building discussed. Strong public opposition to altering the building influenced City Council to authorize construction of the Robert M. Isaac Municipal Court across the street on the site of the old Police Headquarters.

1995 – Placed on the National Register of Historic Places.

1999 – City Council passed Resolution 72-99 "Affirming and Determining that the Assets and Enterprises Under the Control and Direction of the City of Colorado Springs Groups are Strategic and Meet the Guidelines for Determining Strategic Assets." Included in this list was the City Auditorium.

2003 – Administration recommends not accepting a grant of $75,000 from the Colorado Historical Society to refurbish approximately half the seats in the Auditorium, citing the desire to further study the Auditorium’s future.  There was concern regarding 20-year covenant restrictions tied to the grant award. (Resolution No. 206-03)

2004 – The Friends of the Historic City Auditorium was formed in response to potential sale of the facility.

2006 – Compass Facility Management Inc. was engaged to study the historic nature of the building; develop potential marketing and operating options; and prepare an extensive cost estimate for major facility repairs, renovations and upgrades to be funded by the City and Downtown Partnership. The study suggests $15 million is needed to address needs and upgrade the facility.

2007 – The consulting firms of Robert B. Sharp Company and Brian Wishneff and Associates researched private sector fundraising opportunities along with the use of various tax credit programs in an effort to assemble cash resources for Auditorium improvements.

2008 – City Council reviewed 2006 and 2007 reports on the facility and funding, including a specific feasibility study for a $5 million capital campaign through contributed funds and the use of tax credits.

2012 – A Request for Proposal (RFP) for management services for the Auditorium was released (R12-092 LJ).  No proposal met the requirements of the RFP, so no award was made.

2019 – A request for Best and Final Offer is provided to three RFP respondents for operation and management of the Auditorium. The Colorado Springs Cultural Community Collective at City Auditorium (CSCCC) is selected, and negotiations begin.

2020 – The COVID-19 pandemic puts a hold on negotiations. The Auditorium is used as a Homeless Isolation Shelter through May 2021.

2021 – Negotiations restart with CSCCC and result in a Memorandum of Understanding with a six-month Due Diligence period commencing Sept. 6, 2021 to determine the viability of CSCCC’s proposed renovation and operation with an estimated construction budget of $53 million.

2022 – The City and CSCCC sign a second amendment to the MOU which grants the CSCCC permission to operate the City Auditorium and gives a minimum of three years for the nonprofit to provide proof of funding and a feasibility study for its proposal.

The National Register of Historic Places is the official list of the nation's historic places worthy of preservation. In 1995, the City Auditorium was placed on this list. The Auditorium is considered historically significant as a manifestation of community planning and development efforts that produced a valued public resource, beginning in 1922. It is architecturally significant as the final collaborative effort of two locally significant master architects, and as the last local representation of publicly owned Classical Revival architecture. Being on the register ensures eligibility for grants from Colorado’s State Historical Fund (SHF).

Authorized by the National Historic Preservation Act of 1966, the National Park Service's National Register of Historic Places is part of a national program to coordinate and support public and private efforts to identify, evaluate, and protect America's historic and archeological resources.  Under Federal Law, the listing of a property in the National Register places no restrictions on what a non-federal owner may do with their property up to and including destruction, unless the property is involved in a project that receives Federal assistance, usually funding or licensing/permitting.

The Murals in the City Auditorium's lobby were created in 1934 under the Public Works of Art project, one of Franklin Roosevelt's New Deal programs during the Great Depression. Both artists; Archie Musick and Tabor Utley; were associated with the Broadmoor Art Academy (later part of the Colorado Springs Fine Arts Center) under the direction of Boardman Robinson. In 2004, Victoria Montana Ryan of Arts Care Services conserved the murals, and Bulbs Plus, Inc. provided museum quality lighting. 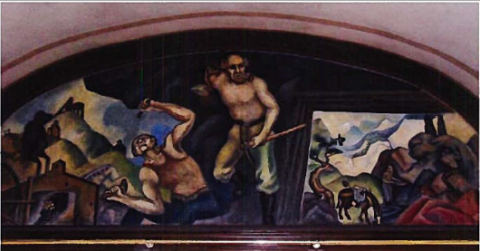 Archie Musick's "Blew into town on a freight train" in 1924 and fell in love with the Mountains and Garden of the Gods. He studied art for many years in Colorado Springs with Boardman Robinson and also studied in New York with Thomas Hart Benton and in California with Stanton MacDonald-Wright. Musick taught art for 33 years, in Colorado Springs' Cheyenne Mountain school district and in Missouri and Colorado universities. He painted murals in post offices in Manitou Springs and in Red Cloud, Nebraska, as well as in Canyon Elementary School and downstairs in the Colorado Springs fine Arts Center. Musick's inspiration of "Hard Rock Miners' came from his fascination with the Cripple Creek-Victor gold mine ruins, and the importance of mining in the history of the Pikes Peak Region. Having worked many pick and shovel jobs himself, he closely identified with the hard labor of the miners. 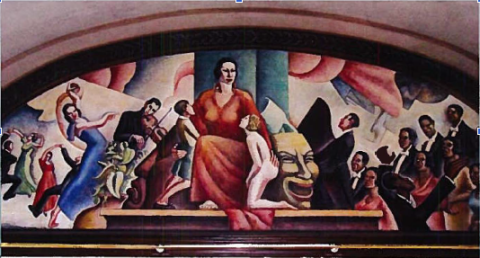 After a military career during World War I, Tabor Utley came from Louisiana to the dry air of Colorado for his health. He began a new career as an artist, studying in Denver, Colorado Springs and in Paris at the Louvre and Luxembourg museums. He taught at the Broadmoor Academy and Pueblo Community College, and assisted Boardman Robinson in painting murals in New York in 1932. "The Arts" depicts comedy and tragedy masks (the traditional symbol of theatre); instrumental music; a gospel choir; dance; and the muse, youth and innocence. Utley's portrayal of a broad spectrum of performing artists made a strong statement in its time about the public, inclusive nature  of the arts and of the City Auditorium itself.