Did you know? City of Colorado Springs snow plow trucks are white, CDOT trucks are orange, and El Paso County trucks are red.

The City of Colorado Springs Operations Maintenance Division must be prepared for minor and major snowstorms from September through May.

The City's Operations Maintenance Division is responsible for servicing 5,833 lane miles of roadway, extending over a 194 square mile area. While average annual snowfall stands at 42 inches, snow can pile up quickly at varying rates throughout the City.

Elevation and wind can compound accumulation, causing an immediate impact on the City's mobility. Hence, the need for safe and passable streets is a priority for the Operations Maintenance Division. Due to resource constraints residential streets will not be plowed until at least 6" of snow has fallen.

Don't crowd the plow.  Snowplows plow far and wide, sometimes very wide.  The front plow extends several feet in front of the truck and may cross the centerline and shoulder during plowing operations.

Don't tailgate or stop too close behind snowplows.  Snow plows are usually spreading deicing materials from the back of the truck and may need to stop or take evasive action to avoid obstructions or stranded vehicles.  If you find yourself behind a snow plow, stay behind it or use extreme caution when passing.  The road behind a snowplow will be safer to drive on.

Remember, a snowplow operator's field of vision is restricted.  You may see them but they may not see you.

Click on the map below to view the City of Colorado Springs Snow Routes.  Click on a route to see information such as material used on that route and the classification of the street.

The Operations & Maintenance Division generates weather data from the National Weather Service and other sources that provide information about storm probability, expected start and end times, anticipated total accumulations and other data that assists the City in preparing for and responding to these storms.

The Operations & Maintenance Division's first priority is to plow arterials and collectors (most streets with stripes) first. This is so the streets with the most amount of regular and emergency traffic are as safe as possible.  Weather conditions determine the number of plows and types of materials used for each storm.

The City of Colorado Springs Operations & Maintenance Division is responsible for snow removal on City Streets.  City crews clear about 1,800 lane miles on main roads when snow accumulates during a storm.

The Operations and Maintenance Division plows streets that are within city limits.  The Colorado Department of Transportation plows state highways that fall within city limits like Powers Blvd and I-25.  Public Works also works closely with El Paso County and shares and "Exchange of Maintenance" Agreement on roadways where it is mutually beneficial.

You can decipher the different agency plows simply by color: City of Colorado Springs trucks are white, CDOT trucks are orange, and El Paso County trucks are red.

The City uses two materials on City streets.  The first material is called "anti-skid" and is used on most snow routes.  Anti-skid can contain up to 20 percent salt, and is used to aid in vehicle traction.  The second material is used on many of the City's thoroughfares and is called "IceSlicer."  This material is a de-icer and will lower the freezing temperature of water.  IceSlicer will work down to around 10 degrees.  To view maps that show these routes, click here.

Q) How does the city determine which streets to plow during a snow event?

Main streets, or most streets with stripes, are the priority for Colorado Springs Public Works and our largest plows.  These are the streets that carry most of the city's traffic as well as emergency vehicles and public transportation.  The number of plows deployed and the option of pre-treating or anti-icing the streets depends on the weather conditions.

During major snow events when Colorado Springs receives 12 inches or more of snow accompanied by prolonged freezing temperatures, 4x4 plows may be deployed to simultaneously clear residential, or neighborhood, streets.

Q) When Will You Plow My Residential Street?

When the primary and secondary routes are cleared and safe for travel, the Operations & Maintenance Division may begin plowing and applying anti-skid by grid in residential areas where snowfall has exceeded 6".  This is after the storm has passed and snowfall has ceased.

The goal of the City of Colorado Springs Snow and Ice Control Plan is to maintain a safe flow of traffic throughout the City and ensure that each residential area is in close proximity to a plowed street.  Emphasis is also placed on ensuring emergency services can be provided throughout the city.

Q) Why did the plow push snow on my shoveled sidewalk/driveway?

Pushing snow onto sidewalks and driveways is an unfortunate consequence of plowing any street with heavy plows.  We have always been very forthcoming about this potential issue with the community and the feedback we receive is that the priority is to keep our streets passable and continue to plow the streets. 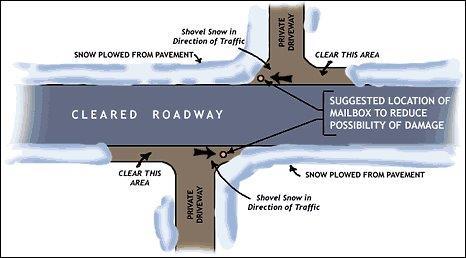 Q) How many large snow plows does Colorado Springs have in its fleet?

Four Loaders at District Facilities to load material into the plows

"Full Call-Out" means anywhere from 36-40 plows, and four motor graders on the street, for a total of 40-44 pieces of heavy equipment.

Q) How many people does it take to run a snow shift?

1 Person at the operations Center

Q) How/When does Public Works use de-icing and anti-skid materials?

Treated Salt is used to melt snow and ice at low temperatures and keeps ice from forming on the road surface after it has been plowed.

Anti-Skid is a mix of Sand and Salt and is used when the temperatures fall enough to decrease the effectiveness of de-icers.  The salt in the anti-skid helps to imbed the sand in the ice and the sand increases traction on icy roadways.

Magnesium Chloride is a liquid de-icer that is very effective at melting ice when the temperature outside is above zero.  We use this material to help keep ice from bonding with the road surface and makes it easier to plow snow and ice from the roadway.  We also use Magnesium Chloride in conjunction with Salt to help activate the material before it hits the roadway which increases its effects on ice.  We also will "pre-wet" anti-skid with magnesium chloride which keeps the sand from blowing off the roadway and helps it to imbed into the snow and ice to increase traction.

Q) Why are there more potholes after the snow season?

During the winter, potholes are created when moisture seeps into cracks in the surface of a road and freezes, causing it to expand.  When the ice thaws that space is left empty, resulting in a hole in the pavement or a "pothole."

We encourage residents to call 385-ROAD to report any potholes.

Q) What should I do with my trash and recycling during snowy conditions?

DO shovel a path to your recycling cart and trash barrel.

DO keep these container off patches of ice for safety.

DO put your cart and trash barrel as far in the street as possible - not behind snow banks.

DO leave a 4' space on either side of your barrel and recycling cart allowing easy access by our trucks automated arms.

DON'T use cardboard boxes as a trash container.  This is always a "Don't" no matter what the weather conditions.

When you see a plow on the street, give the plow driver plenty of room to work.

If you are unable to shovel the snow into your yard, attempt to shovel it as close to the curb as possible.

Shovel snow into small piles instead of large piles.  This allows the sun to melt the piles quicker and prevents them from turning into dangerous ice banks.

Also, click on Your Part above to see more that you can do.

Q) Snow plows are often seen driving on the streets with the plow blade up.  Why aren't these plows working to clear the roads?

Like any organized plan, snow plowing only works when everyone stays on track and on schedule.  Public works strategically deploys  resources to best meet the priorities of each snowfall. To be successful, plows absolutely must stick to their assignment and not take time to plow in between locations.

Because they must travel in between route locations or back to their snow station, drivers must have their plow blades off the ground to stay on schedule.  Trucks must travel at much slower speeds when plowing, so when a truck is plowing where it isn't scheduled to work, it cannot reach its designated work assignment on time which can impact the progress of other plows in the area.

In cases where accumulations on the street are just beginning, or where streets have already been plowed, snowplows may drive with their plow up while applying deicing material.  To maximize effectiveness, the deicing material needs time to absorb into the snow/ice before it is plowed.

All State and County roads are maintained by their own staff. For information on snow removal on State or County roads, call: