The City of Colorado Springs includes approximately 6,000 lane miles of roadway. If you put all those lanes end to end, they would stretch from Colorado Springs to Rome, Italy. Maintaining all that roadway during severe winter weather is a challenge, but our Public Works Operations and Maintenance Division is up to the task!

Keep in mind that state highways and interstates are maintained by C-DOT, not City snow crews. This includes I-25, Highway 24 and Powers Blvd. 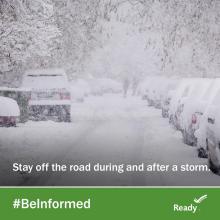 Once primary routes are passable, crews start on secondary routes. They include school access streets and collector streets that serve as the main connections between neighborhoods and primary roads.

If there is continuous snowfall, the Primary routes may have to be plowed more than once, which will delay the response on secondary streets.

Residential streets are only treated when at least six inches of snow accumulates and the primary and secondary routes have been cleared and the snow has stopped falling.

To learn more about the City’s snow response, visit coloradosprings.gov/snow.

Please note: Vehicles left on public streets will be towed and stored at the owners’ expense.  It is essential to keep stranded cars off of the streets to allow for snow plows and emergency vehicles to pass.  Motorists who feel they won’t be able to make it all the way home should pull into a parking lot if possible.