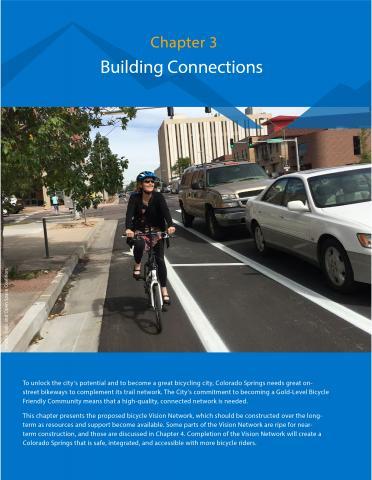 To unlock the city’s potential and to become a great bicycling city, Colorado Springs needs great on street bikeways to complement its trail network. The City’s commitment to becoming a Gold-Level Bicycle Friendly Community means that a high-quality, connected network is needed.

This chapter presents the proposed bicycle Vision Network, which should be constructed over the long term as resources and support become available. Some parts of the Vision Network are ripe for near term construction, and those are discussed in Chapter 4. Completion of the Vision Network will create a Colorado Springs that is safe, integrated, and accessible with more bicycle riders.

The bicycle Vision Network—a selection of streets in Colorado Springs on which to implement appropriate bicycle infrastructure—will improve connectivity and access to destinations across the city. Building upon existing trail and on-street facilities, the 379-mile Vision Network comprises 157 miles of recommended corridors identified as part of the 2015 PPACG Regional Non-motorized Plan, 19 miles of recommended facilities from the 2016 Experience Downtown Master PlanA plan for the development of a portion of the city that contains proposed land uses, a generalized transportation system, and the relationship of the area included in the plan to surrounding property., and 203 new miles of recommended corridors from the COS Bikes! process.

This Plan does not make specific bicycle facility recommendations, but instead allows the City implementation flexibility as it completes COS Bikes! and builds out the bikeway network. The Bicycle Facility Toolbox provided in Appendix B should be used to make appropriate facility selection and design decisions for individual segments within the Vision Network. 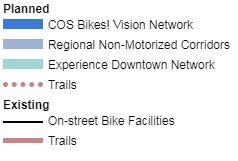 The Vision Network includes corridors along roadways of all sizes and types, from regional arterials to narrow, slow residential streets, planned streets, and off-road alignments. The goal of the Vision Network is to provide a comprehensive network of bikeways that connects Colorado Springs residents and visitors to jobs, schools, transit, shopping, open spaces, and recreational opportunities, such as the single track network. When the Vision Network is built out, there will be direct, convenient bicycle connections to all of these types of destinations, complete with comprehensive wayfinding signage (see Chapter 4), increasing the likelihood that Colorado Springs residents and visitors will bike for transportation.

The Vision Network was developed through an iterative process of existing conditions analysis, public input, review of previous plans, and stakeholder review and discussion.

Existing bikeway facilities, proposed PPACG corridors, and Experience Downtown corridor recommendations were mapped, forming the basis of the Vision Network. These recent planning efforts included significant analysis and public engagement, and the corridor recommendations stemming from these plans will help achieve the goals of this plan. Gaps that remained after combining these three bike networks were identified and filled for the completion of the COS Bikes! Vision Network.

A citywide bicycle demand heat map was developed. Bicycle demand was estimated based on several factors that affect bicycling: employment, population, commercial land use, transit hubs, colleges, K-12 schools, parks, libraries, and public comments from the PPACG Plan. Equity factors such as income and car ownership were also analyzed to ensure that the proposed bikeway network serves the most bike-dependent areas of Colorado Springs.

COS Bikes! proposes corridors in the areas of the city that have the highest potential demand and need for bicycling. The Vision Network is denser in more established, built out parts of the city because the street network in these areas allows for more frequent connections and there tends to be a higher concentration of destinations and bicycling activity. The Vision Network also includes corridors that connect to regional destinations, military facilities, universities and colleges, and major tourist destinations such as Garden of the Gods.

The residents of Colorado Springs helped shape the COS Bikes! Vision Network. In May 2017, more than 240 open house attendees marked up large-format maps with suggestions and reactions to the draft Vision Map, and their answers to questions posed were used to inform the Vision Network. These questions and relevant responses are included below. The full compendium of responses can be found in Appendix D.

Which one recommendation will make bicycling safer in Colorado Springs? The most common relevant response was:

Which one recommendation will make bicycling more integrated in Colorado Springs? Some responses included:

Which one recommendation will make bicycling more inclusive and accessible in Colorado Springs?

Which one recommendation will make more people bicycle in Colorado Springs?

When building out a bicycle network, linear improvements are often the most high-profile projects. However, spot improvements at intersections and other locations can have a much larger effect on the creation of a high-quality and low-stress bicycling environment.

In Colorado Springs, streets in many areas of the city are already comfortable for biking by people of all ages and abilities. However, where these streets intersect with arterials and other busy roadways, it can be difficult or impossible to cross safely or directly, which can prevent people from bicycling. Spot improvements can help link together these networks of slow-speed, comfortable neighborhood streets and off-street facilities, making it possible to get to destinations without bicycling along fast, high-traffic thoroughfares. Spot improvements are needed at locations such as at misaligned, offset intersections or where local streets intersect an arterial at unsignalized intersections. More information about the implementation of spot improvements is included in Chapter 4 and Appendix B.