Pedal Our Past: Cragmor Loop 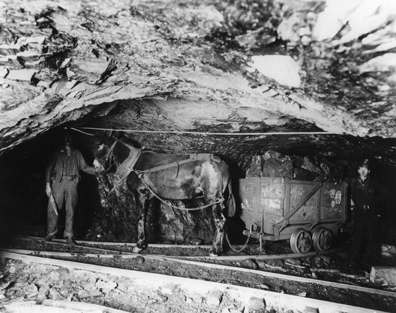 You will experience a little bit of everything on this tour, from tuberculosis sanitoria to Hollywood, and from industrial history to education, plus the flood of 1935.

Lincoln elementary school was built in 1948 (although here was an older Lincoln school on South Cascade from 1886 to 1920).  As families continue moving to suburbs, this school closed in 2013 then shortly after was redeveloped with shops, a brewery, offices, and restaurants.  The site is now a community gathering spot.

Marie Glockner funded a sanatorium in memory of her husband Albert who succumbed to the disease in 1888.  This Catholic institution opened in 1888. By 1905 there was a 38-room sanatorium and 18-room general hospital.

The Atchison, Topeka & Santa Fe Railroad was the main competition for General Palmers Denver & Rio Grande line.  This bike trail follows the Santa Fe route through town, where its depot is still located on East Pikes Peak Avenue.  The last train ran in 1971.

The Chicago, Rock Island, and Pacific Railroad was Colorado Springs’ direct connection to Chicago and the Midwest.  It ran from 1888 to 1979.  These tracks were finally removed in 2013. The trolley museum occupies what was the roundhouse for this railroad company.

Nordrach Ranch Sanatorium was just to the east of this spot, one of the city’s many tuberculosis sanatoriums.  This operated from 1901-1913 and had dozens of Gardiner TB huts for residents, whose treatment included large meals emphasizing meat and milk 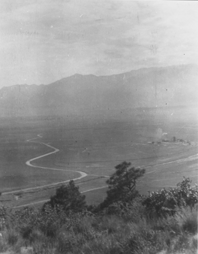 City founder William Jackson Palmer donated land on Austin Bluffs to the city in 1907.  This photo from 1903 shows Paseo drive connecting the city to the park, with a coal mining operation and powerplant on the right of the image.

The Cragmor Sanatorium was one of the most exclusive tuberculosis sanatoriums in the country. It operated from 1905 until 1962, after which the buildings and grounds were sold to the University of Colorado for $1.

In this park were the entrances to two coal mines—Curtis and Patterson. The voids in the old coal works underground created a sinkhole in the baseball center field and cracking in the pool foundation in 1979.  Both mines were closed by 1924.

An unexpected surprise from the region’s coal mining past occurred when a 10-foot wide hole suddenly appeared on Mariposa Street in the Cragmor neighborhood just north of here on August 14, 2017, after a particularly rainy summer.  City workers quickly filled the pit, but the asphalt settled another 8” within a week, requiring more extensive excavation and compaction to stabilize the unconsolidated muck below street level.

Templeton Gap is a small passage between Austin Bluffs and what is now Palmer Park.  It was an alternate route north to Denver, connecting to Cherry Creek.  This was also a hunting and shepherd area in the early days of the city.  A reservoir impounded water from the bluffs in the early 20th century, and Union Boulevard was not completed through to Academy Boulevard until 1985.

Just ahead of this spot Cascade Avenue dropped down to cross Monument Creek, then ran north as the main highway to Denver.  In 1935 a devastating flood washed out this bridge and nearly every other crossing over Monument Creek.  The highway moved to Nevada Avenue, until Interstate 25 was built in 1960.

Roswell was a suburban town built for workers of the Chicago, Rock Island & Pacific Railroad that connected to Colorado Springs in 1889.  By the early 20th century a horse race track was built immediately west of this point, where Fillmore Street now runs.  By the 1940s the track hosted car races as well.  The town was annexed into Colorado Springs in 1950, and by the mid-1950s the track closed and Fillmore Street was completed between Cascade Avenue and I-25 in 1961. 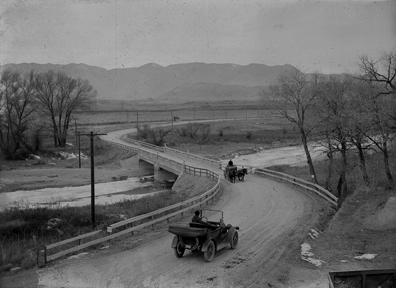