The City of Colorado Springs is gearing up to celebrate the 25th anniversary of the Trails, Open Space and Parks (TOPS) program, which has conserved more than 7,500 acres of open space, built and improved 66 parks and constructed 50 miles of trails in the city.

TOPS has contributed to projects in every quadrant of the city. Open space purchases, like Red Rock Canyon Open Space, are hallmarks of the program. Before Red Rock Canyon was purchased by the City in 2003, it was slated to become a resort community with a convention center, high-rise towers, commercial centers and private golf course. 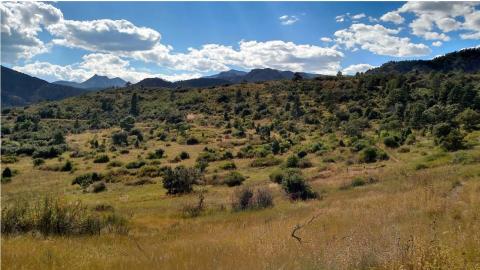 Purchased by the City of Colorado Springs in 1998, Stratton was the first property acquired with TOPS funding. Stratton is 318 acres of open space, trails and wildlife habitat adjacent to North Cheyenne Cañon Park in southwest Colorado Springs.

“It’s nearly impossible to imagine Colorado Springs without the amazing outdoor amenities that we have been able to create and protect through the TOPS program,” said Karen Palus, Parks, Recreation & Cultural Services (PRCS) director. “For the last 25 years, Colorado Springs residents and visitors have made a tremendous investment in our trails, open spaces and parks, and are really the ones to thank for building and preserving our nationally-recognized quality of life.”

To recognize the 25th anniversary of TOPS, the City is launching a 25-week #MyTOPS social media campaign thanking residents for their investment and highlighting how the program contributes to the city’s quality of life. This includes the conservation of land threatened by development, protection of wildlife habitat, wildfire mitigation, maintenance of regional parks and open spaces, and general health and well-being.

Other notable TOPS successes are historic paleontological preservation at Corral Bluffs Open Space; key connections made toward the final vision of Legacy Loop, a vital trail corridor; and a transformed Panorama Park in the southeast set to reopen this summer. TOPS has been a vital funding source for these projects and many more.

In April 1997, Colorado Springs voters passed the TOPS ballot measure dedicated to acquiring, developing and preserving trails, open space and parks through a 0.1% sales tax, or 1 penny on every $10 purchase. TOPS was renewed by voters in 2003 at the same rate through 2025. It currently generates upwards of $11 million annually.

TOPS is managed by the PRCS department with oversight from a nine-member TOPS working committee comprised of Colorado Springs residents who monitor the budget, purchases and projects. The ordinance directs the percentage of funding that can be used in the trail, open space and park categories each year.

For more information on the history and impact of TOPS, plus spending in 2022, visit ColoradoSprings.gov/TOPS.