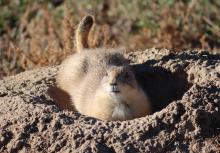 Colorado Springs is a wildlife mecca. Our parks and open spaces provide habitat for hundreds of animal species.

A wide diversity of birds, mammals and reptiles often grace our presence in these natural spaces. We give reverence to the awe-inspiring big horn sheep and stay alert for the fear-striking mountain lion. However, an animal that I believe deserves a little more attention is the black-tailed prairie dog.

These little guys are members of the squirrel family and take residence in grassland ecosystems. Entertainers by nature, they can be spotted most days at Bluestem Prairie Open Space. Nearly 650-acres of grassland in southeast Colorado Springs, Bluestem Prairie is an important conservation property owned by the City of Colorado Springs. Its purchase was made possible by the Trails, Open Space and Parks (TOPS) sales tax, which collects one penny on every $10 purchase. This incredible open space helps protect wildlife ecosystems, like that of the prairie dog.

These conservation efforts are critical for many reasons. Throughout the years, farmers, ranchers and land developers have considered prairie dogs pests. Due to eradication efforts and the introduction of the sylvatic plague, their populations have been reduced by as much as 95%. They are now considered a species of special concern in Colorado. As we dig a little deeper, we’ll find that these charismatic critters are much more than pests.

Prairie dogs are intelligent and highly social creatures that live in colonies or “towns” ranging from 1-1,000 acres. Obstacles such as roads, tree lines and ridges further divide towns into “wards.” Within a ward are many close-knit family groups, or “coteries,” comprised of one breeding male, one to four adult females, and their young up to 2 years old.

Scientists claim prairie dogs have the most sophisticated vocal animal language ever decoded. Not only can they effectively warn each other of predators with a series of “yip” sounds, they can also describe predator types based on size, speed, shape and color. For example, “a medium, rectangle-shaped dog with yellow fur is quickly approaching.”

Research has shown that social chatter is just as important as warning calls. A common form of expression used by prairie dogs is called the jump-yip. This is when a prairie dog abruptly raises its chest up and bends back so far that it often propels itself off the ground. It will also raise its arms for emphasis while emitting a high-pitched “wee-ooo” call.

Not only is it adorable, but also it is contagious; jump-yips will often travel through an entire colony. Some scientists speculate that jump-yips could be an “all clear” sign indicating there is no longer an immediate threat. In more recent studies, scientists claim that it is more so an effort to assess alertness and responsiveness in the group.

Prairie dog towns contain a complex network of underground tunnels called burrows that are maintained over many generations. Not only do burrows provide shelter from predators, they also contain specific chambers, or “rooms,” for sleeping, nursing young, storing food and using the restroom. Prairie dogs aren’t the only ones benefitting from their hard work, however. Squatters such as burrowing owls, snakes, rabbits, and badgers often take residence in abandoned burrows. This is one of many reasons the black-tailed prairie dog is considered a keystone species.

Keystone species are environmental engineers, and their existence directly benefits several other plant and animal species. Their habit of digging and grazing helps fertilize, till and aerate the soil. This directly increases the biodiversity of endangered grassland ecosystems. In fact, the abundance and health of large herbivores such as pronghorns, bison and elk can be linked to their presence. They also provide a food source. Common predators of prairie dogs include coyotes, bobcats, hawks, badgers and weasels. The critically endangered black-footed ferret depends almost entirely on prairie dogs for food.

Understanding the black-tailed prairie dog can help rebuild their reputation. They aren’t merely pests; they are intelligent (and adorable) environmental stewards.

Lindsey Meyers is a natural tesource technician for the City of Colorado Springs’ Parks, Recreation and Cultural Services Department. She majored in Environmental Science at the University of Central Florida. She enjoys being outdoors, playing guitar and singing.

This article first appeard in the Gazette.