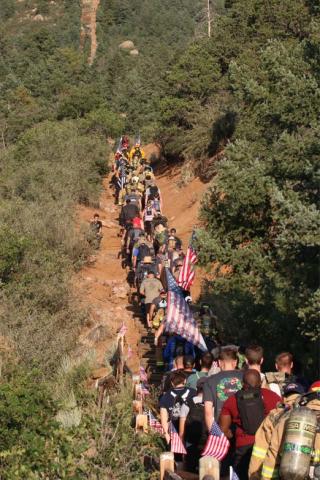 Who would have thought that when I decided to get a part-time seasonal job 17 months ago, I would find myself in one of the most memorable positions I have had? I was looking for work when a friend said his employer was looking for more people to join their team. He was a Manitou Incline Attendant, checking-in people as part of the new free reservation system for the Manitou Incline. Sure – why not?

An outside job during the time of COVID seemed like a good idea. So, I applied, and became a member of the Manitou Incline Attendant Team.

I had learned a little about this trail during the 8½ years I’d lived here. A cable car used to take tourists to the top of Mount Manitou before it closed in 1990. The rails were removed, and the remaining ties formed a natural staircase up the side of the mountain. And even though it was illegal to hike until 2013, many people came to the region to climb it. It has also been a popular training location for many Olympic and Paralympic athletes, including Apolo Ohno, during their time in Colorado Springs.

What I did not know is what this trail meant to so many people. Who knew such a community would exist based around a trail made of 2,768 steps? I sure did not, but that all changed after my first couple of shifts.

On Christmas Day, I saw people making the climb in their silliest Christmas attire while others hiked to the top carrying hot cocoa to hand out to those braving the chilly winter morning. It’s where some go to conquer their goals, be it their first Incline ascent or their 1,000th for the year. It’s where some go to defeat their demons. Some use it for Ultra Marathon training, while others are just there to enjoy this unique slice of nature.

It does not matter what brings you there, what you will find is a group of people with friendly faces and words of encouragement to help you reach the top.

By far the most memorable time as part of the Incline team was being involved with the 6th Annual Firefighter Incline Climb. This was the first time I had been involved in a remembrance event for 9/11 and it was a most humbling experience. It was the 20-year anniversary of the tragedy, and firefighters came in from around the country to partake in the remembrance climb. Joining them were crews from Miami who, just months before, were involved with the Surfside Condominium collapse rescue effort. I was honored to be able to lead moments of silence as both firefighters and community members gathered at the base of the Incline. That will truly be a moment I shall never forget.

I was lucky enough to be involved in other cool initiatives throughout my time with the Team. Alongside the “Incline Friends” group, I was able to make our Incline community more aware of the Leave No Trace Seven Principles during Hot Spot Week. On Earth Day this year, I found myself out there with the Incline Friends again helping with a water container swap out. This initiative replaced single use water bottles with reusable ones for hikers about to tackle the climb. I hope to be back out there this summer along with the Incline Friends doing more water bottle swap-outs and volunteering my time helping with trail maintenance.

What I did not realize is that taking this job would inspire me to pursue a childhood dream of becoming a park ranger. And in following this dream, I will soon be leaving it to be a park ranger at Pikes Peak- America’s Mountain this summer. Although my time as a part of the Incline Team will soon come to an end, I feel like I will forever be a part of the Incline Family!

Matthew Sutton is the Incline Administrator for the Free Incline Reservation System, managed by the City of Colorado Springs’ Parks, Recreation & Cultural Services Department. An avid fisherman, Matthew is thrilled to be starting a new position at Pikes Peak – America’s Mountain as a park ranger for the North Slope Recreation Area. This content first appeared in The Gazette’s “The Tribune” and is reprinted here with permission from Pikes Peak Newspapers. It is part of a monthly column, “Ranger Ramblings.”