Updates made to the Parkland Dedication Ordinance, what they mean 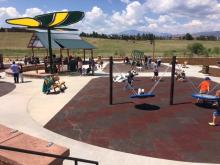 This is the first major update to the ordinance since it was established in the 1970s. The updates are significant because they ensure that new residential development provides parkland so new residents have the same parkland as existing residents, proportionately across the city. The prior ordinance used 1970s U.S. Census data, featured an outdated method to arrive at the value for parkland development fees, and it needed to be brought into alignment with decisions of the United States Supreme Court concerning development requirements.

What are the changes?

Following the recommendations of two sets of Colorado Springs Park System Master plans, the acreage requirement was updated from 7.5 acres per 1,000 residents to 5.5 acres. Although the original ordinance previously required 7.5 acres, data from 2000 and again in 2014 showed that for more than 30 years, the city has provided an average of 5.5 acres of designated parkland in the neighborhood and community park categories.

Updating the required acreage to 5.5 acres per 1,000 residents reflects the actual space needed to create parkland in new developments to more closely align with what the city already provides in existing neighborhoods. The new formula also aligns with updated U.S. Census data that shows a 17 percent reduction in average household size since the early 1970s, when the previous ordinance was created. That means that today, it takes more rooftops to get to the 1,000 residents than were needed 50 years ago to accommodate the same number of people.

The primary purpose of fees in lieu of land is to allow the parks department to purchase parkland, to develop new elements in an existing park, or to build new parks. When it comes to this ordinance, the preference of the parks department is to receive land instead of fees in lieu of that land, when possible. However, there needs to be flexibility because the property owner doesn’t always have viable parkland to give. An example is a new apartment complex located downtown.

The new ordinance adjusted the fees that developers pay to better reflect the real estate market. Based on a real estate appraisal process, they will increase from $76,602 per acre to $98,010 per acre for community parkland and from $76,602 per acre to $137,694 per acre for neighborhood parkland. Fees will be reevaluated every four years. The fee increase allows the parks department to purchase the intended amount of parkland to serve new residents, which it couldn’t achieve with the outdated fees.

Another update is that fees in lieu of land that are collected for neighborhood parks are now required to be used in the same geographic area as the development assuring the fees will help provide for a park that is close to the new residents. As always, additional funding will be required to complete neighborhood parks, as PLDO fees are one piece of the funding structure.

Which parks will be affected by the updated ordinance?

More than half of homebuyers say they'd choose a home that was close to parks and open space over one that was not, according to a survey by the National Association of Realtors. They'd also be willing to pay 10% more for that home.

Parks are important to our quality of life. They promote public health and wellbeing by providing opportunities and resources for outdoor recreation and exercise.

Neighborhood parks are designed to serve neighborhoods and generally feature playground equipment, sport courts, informal fields and picnic areas. The people who visit them most often live within a 10-minute walk of the park. There are 143 neighborhood parks in Colorado Springs.

According to the Trust for Public Land, the nationwide average for cities with residents living in walking distance to a park is 55%, Colorado Springs is 74%. It is a priority of the parks department to maintain and find ways to increase this level of service.

Support for the updates

The Park System Master PlanA plan for the development of a portion of the city that contains proposed land uses, a generalized transportation system, and the relationship of the area included in the plan to surrounding property., a guiding document for park use and planning that is updated every 10-15 years, first recommended in 2000 that the PLDO acreage requirement should be lowered to 5.5 acres per 1,000 residents. This recommendation was made after a benchmarking activity showed the actual level of service is 5.5 acres and that the ordinance should be aligned appropriately.

This recommendation was made again in the 2014 Park System Master Plan, recognizing that, of course, we’d like to have additional parkland, but not through development requirements.