About America the Beautiful Park: 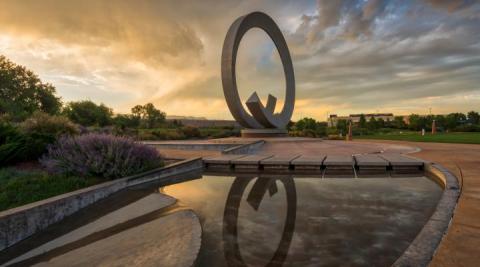 The America the Beautiful Park Fantasy Playground includes hammocks, spinner bowls and turntables that will provide "out of this world" fun for all who come to play!

There are interactive pieces of art, called Quirks, which inhabit one side of the playground. The Quirks were created through the help of almost 100 students from Bristol Elementary, Columbia Elementary, Globe Charter, and Washington Elementary Schools. In addition to designing the Quirks, each school's students provided a story on their particular Quirk's life that was added to the site. Students finished painting the Quirks during the volunteer community playground build.

The America the Beautiful Park Fantasy Playground was made possible through the donations and efforts of the Phil Long Community Fund, Denver Broncos Charities Fund, El Pomar Foundation and the Colorado Springs Parks, Recreation and Cultural Services Department. The Phil Long Community Fund and the Denver Broncos Charities Fund have established an annual fund to build large playgrounds throughout Denver and Colorado Springs. To date, four state-of-the-art playgrounds have been funded through this partnership in Colorado Springs. Palmer Park (1997), Memorial Park (1999) and Cottonwood Creek (2001) represent the other Fantasy Playgrounds located in Colorado Springs.

Designed by David Barber and Bill Burgess, this sculptural fountain represents the life-giving movement of water between the atmosphere and the earth.

Across the country, cities are paying attention to community livability and are investing in spaces that create a sense of community while adding to community life and strengthening economic viability.

In 1992, a combined effort produced the Downtown Action Plan that established goals and vision for assuring the vitality of the Downtown area. Included was a premier amenity, America the Beautiful Park, a 16.9-acre site.

In 1994, a partnership between local governments and citizens developed the Master PlanA plan for the development of a portion of the city that contains proposed land uses, a generalized transportation system, and the relationship of the area included in the plan to surrounding property. for the Pikes Peak Greenway to extend a multi-use trail serving as the spine of the countrywide trails system. Part of that plan included a "greenway" to be developed along the creeks, linking the broader areas into the America the Beautiful Park area.

In 1998, the community approved a bond issue that included $11 million for use in developing the park, and that has stimulated further development in and around the park.

In July of 2000, a Master Plan was developed for the entire park and has been approved by City Council for continued development. This document addressed the 16.9-acre park, plus an additional 40 acres surrounding it; bounded by I-25, the Union Pacific Railroad tracks, Bijou and Cimarron streets.