Neighborhoods throughout the city have very different characteristics, and are at different stages in development. Therefore, they have differing issues, needs, and priorities. To help address this variety, PlanCOS recognizes several different desired neighborhood typologies to provide a more useful context for City goals and policies. Typologies inform what makes vibrant neighborhoods and suggest enhancements. Achieving these goals will contribute to the prosperity of the city overall. As major projects and changes are proposed, these neighborhood boundaries and typologies should be considered as guidance for discussion and choices about strengthening and supporting neighborhoods. As such, these typologies should be consulted and applied with the understanding that they are examples and therefore need to be considered in context to the surrounding land uses, land use transitions, and overall character.

Some neighborhoods may not fit into a single type because of their individual circumstances and conditions. Planning challenges also result from overlaps in neighborhood typologies that arise from transitions between neighborhoods, or other factors such as varying landscapes (Chapter 7: Majestic Landscapes), multimodalIncluding more than one mode of transportation. For example, a facility that accommodates lanes for motorized vehicles, bike lanes, sidewalks, and transit stops. transportation corridors (Chapter 5: Strong Connections), and incorporation of activity centers (Chapter 3: Unique Places). As further described in Chapter 3 and under Typology 2 below, Downtown is considered its own unique type of neighborhood.
Neighborhood typologies are as follows: 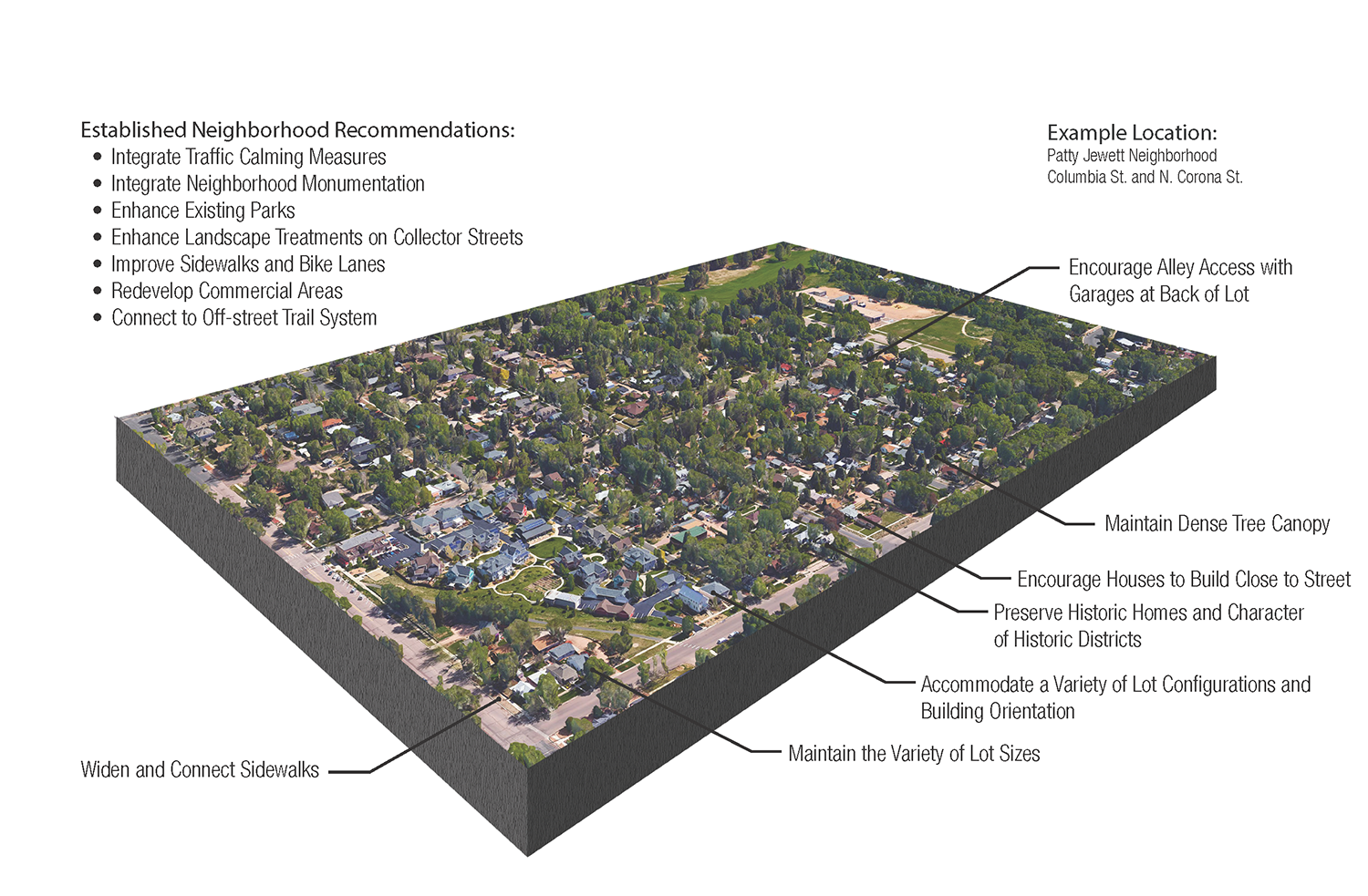 Established Neighborhoods are predominantly built-out and have been for at least a few decades. Relative to other neighborhoods, they are stable and do not anticipate high levels of land use changes. However, most Established Neighborhoods within the city should expect some degree of infillDevelopment of vacant land within previously built areas. These areas are already served by public infrastructures, such as transportation and utilities. Parks and open space are also considered infill, since they are permanent uses for vacant parcels. and redevelopment. Within this typology, several distinctions are important to the application of PlanCOS, as defined by the following sub-categories: 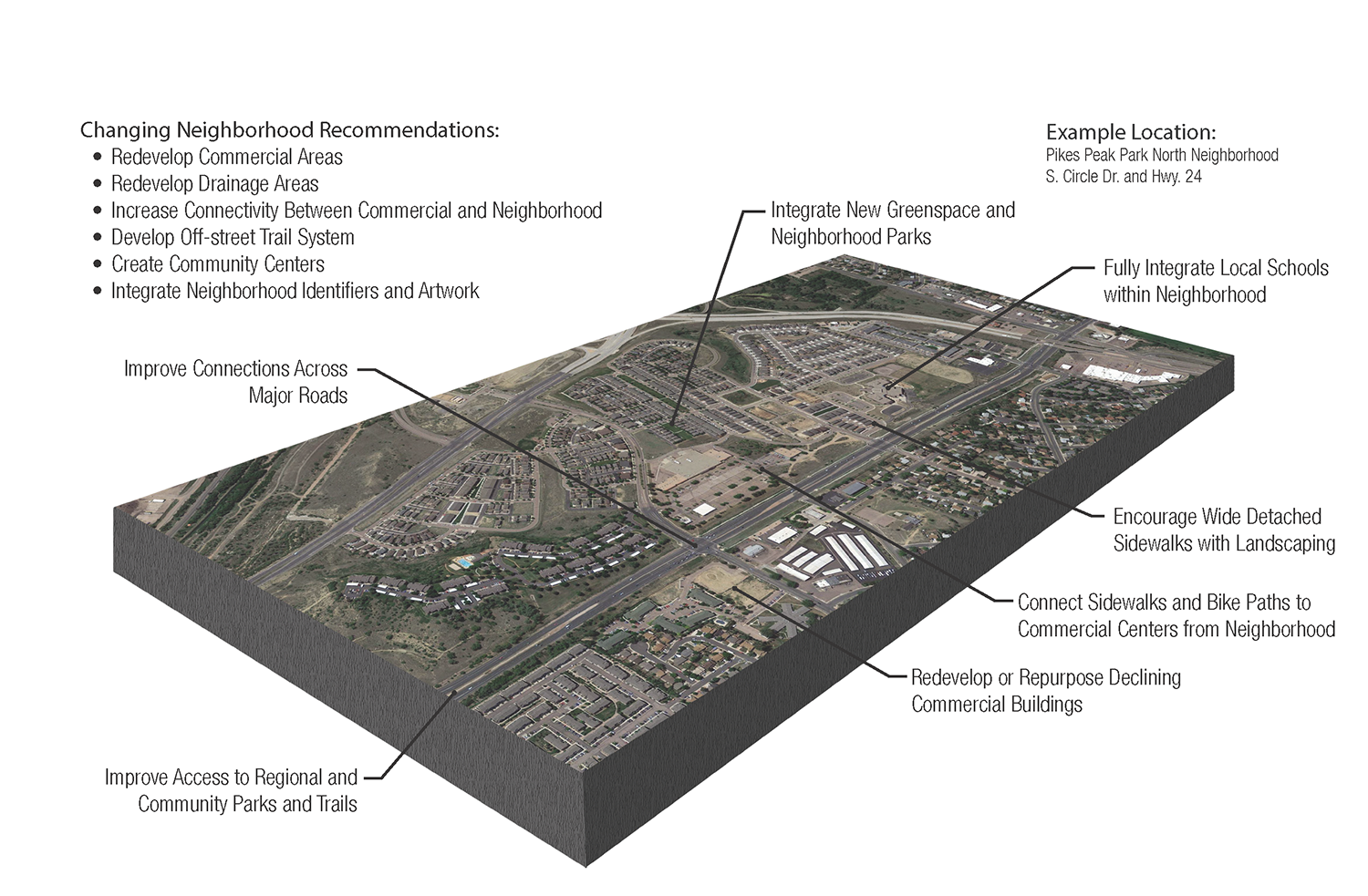 The goal of this neighborhood typology is to retrofit, reinvent, and introduce new features to enhance the identity, quality, affordability, and attractiveness of these neighborhoods.

Changing Neighborhoods primarily include existing neighborhoods that have the potential or need for City attention, reinvestment, and land use change. Areas of change within these neighborhoods may be focused at the edges (e.g. because of a redeveloping arterial corridor or special area) or be more evenly distributed throughout. Planning emphasis should be placed on implementing strategies necessary to support, incentivize, or adapt to change resulting from market forces, redevelopment, or disinvestment. These neighborhoods will expect to see more infill and redevelopment than other areas of the city. 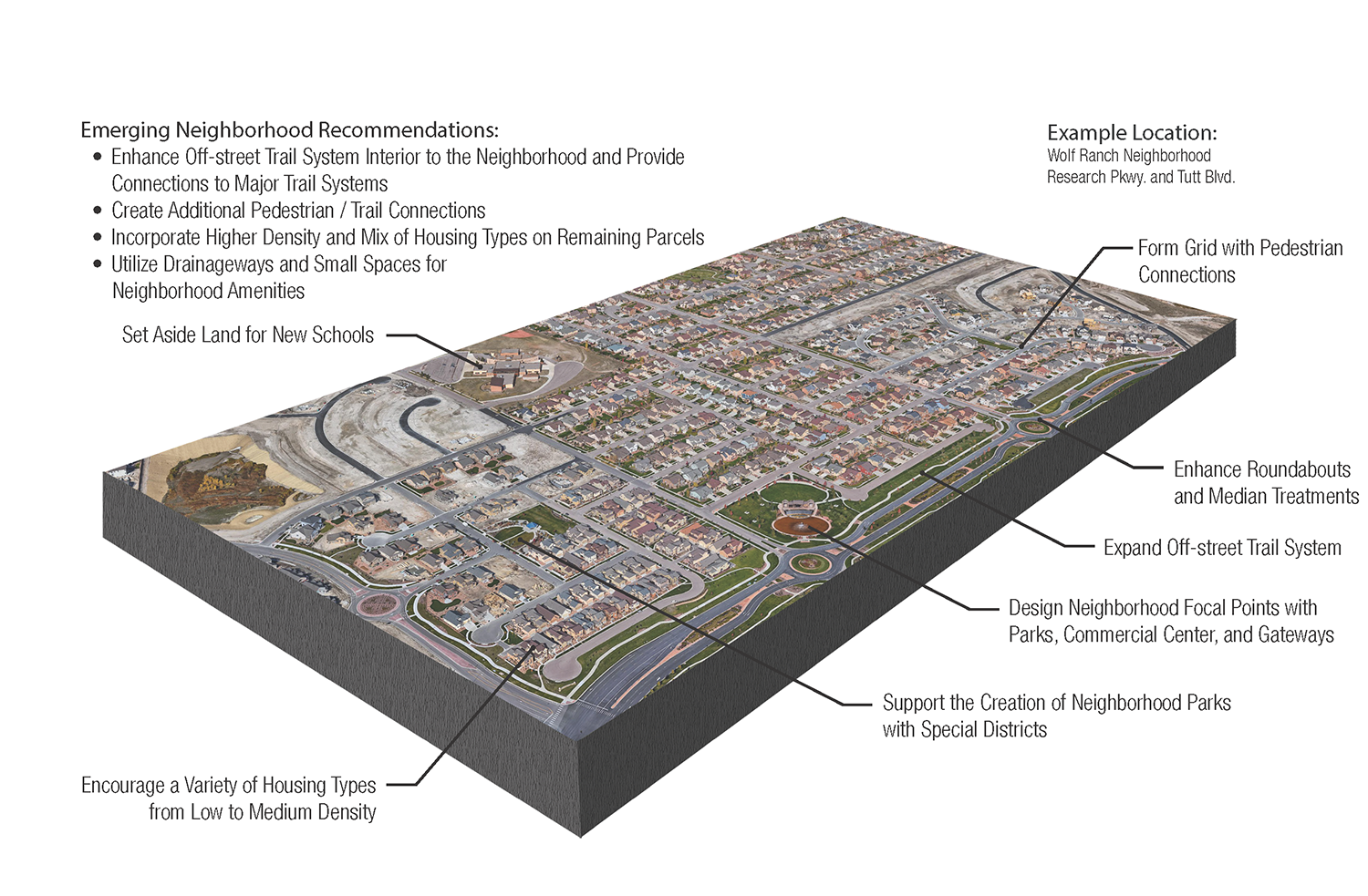 The goal of this neighborhood typology is to ensure the further application of amenities and best practices within these neighborhoods in order to enhance their livability and adaptability as they mature.

Emerging Neighborhoods are found in newer areas of the city, now farthest from Downtown. Actively managed, privately initiated master plans typically guide their initial development and can be refined and updated for not-yet-developed properties. Such adaptations are a focus of this Plan, as development in these neighborhoods should consider the impact that proposed development has on existing infrastructure and neighborhoods. Parts of these neighborhoods with recently completed construction are assumed relatively stable, and less vulnerable to near- and mid-term change. In most cases, these Emerging Neighborhoods are located in and served by special districts that are used to finance public improvements and to provide higher levels of ongoing services and amenities. 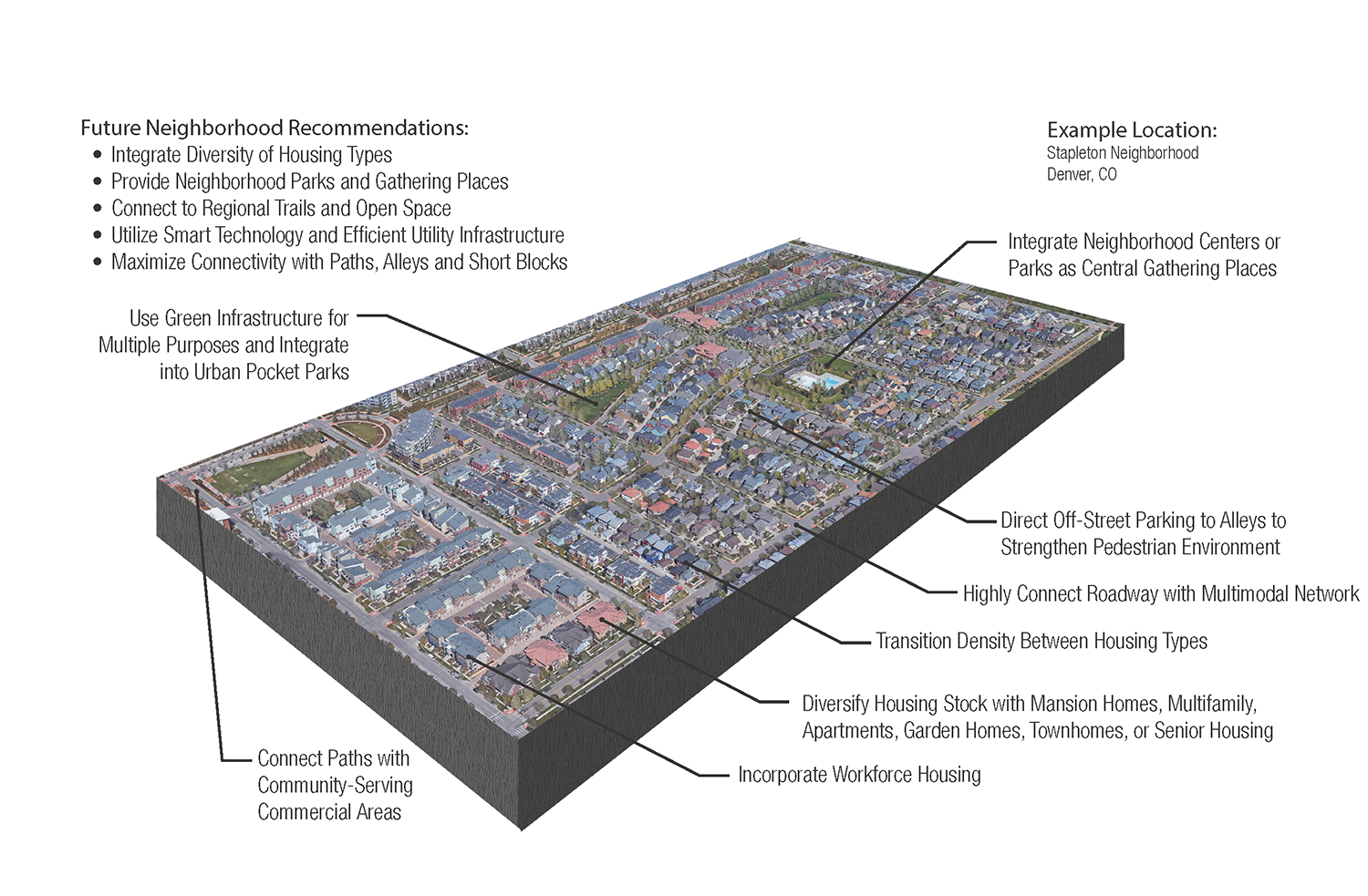 The goal of this neighborhood typology is to include those desired elements that result in great neighborhood design as each new neighborhood emerges over the next 20 years.

Future Neighborhoods are those that have yet to be developed in the city, most notably within Banning Lewis Ranch. These areas provide an opportunity to create, from the ground up, new, diverse, and “smart” connected neighborhoods that reflect the PlanCOS Vibrant Neighborhoods vision and goals, while addressing emerging demographic and market considerations. These neighborhoods should consider the impact their development has on existing infrastructure and neighborhoods. For the most part, they are expected to be actively guided by privately initiated master plans or other guiding documents such as Planned Unit Development plans or holistic concept plans. These newly developed or amended documents should be prepared and adopted with consideration of this Plan.