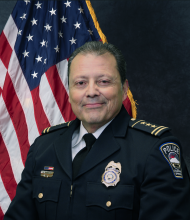 “Deputy Chief Vasquez is a highly respected and experienced officer with deep connections within the Colorado Springs community. He has served in a number of roles within law enforcement and as a long-time resident, he has a strong understanding of the challenges facing Colorado Springs,” said Mayor John Suthers. “I look forward to his leadership and am confident in his ability to maintain CSPD’s high standards as we conduct the search for a new chief of police.”

Vasquez joined CSPD in 1995, after serving in the United States Air Force for 9 ½ years. Vasquez has served in the Sand Creek Division, the Metro, Vice, Narcotics and Intelligence (Metro VNI) Division and on the DEA Task Force. He was promoted to Lieutenant in 2011, where he served in Patrol before transferring to the Violent Crimes Section where he oversaw the Homicide, Assault, Robbery and Victim Advocacy Units. Vasquez was promoted to the rank of Commander in 2016 when he was assigned to the Stetson Hills Division. In 2017, he was transferred to the Specialized Enforcement Division where he oversaw the Tactical Operations Section, Patrol Support Section and Protective Security Section. In April of 2019, he was promoted to Deputy Chief where he has oversight of the Patrol Operations Bureau.

Vasquez holds a Bachelor of Science degree in Sociology from Colorado State University and a Master’s degree in Criminal Justice from the University of Colorado at Colorado Springs. He is a graduate of the Center for Creative Leadership and the FBI National Academy, Session 267.

The City of Colorado Springs has started a national search process for its next chief of police. At this time there is no timetable for its completion. A photo of Vasquez is attached to this release for media use.