On August 3, 2020, a group of protestors marched on the home of a CSPD sergeant for his involvement in fatally shooting an armed suspect during a 2019 robbery investigation.

Note: Following an investigation completed by the El Paso County Sheriff’s Office, a Grand Jury determined the officer involved shooting was justified. The Federal Bureau of Investigations also reviewed the case and found no criminal violations.

What may have begun as a peaceful protest, quickly escalated into riotous and illegal behavior.

We understand and share in the frustration with delayed enforcement; however, the safety of our community is paramount. Please be assured, delayed arrests do not deter our efforts in holding people accountable for engaging in illegal and dangerous behavior.

The following are excerpts from Colorado law regarding riots:

Following the riot, CSPD detectives were able to identify several rioters engaging in illegal activity. They also worked with the Fourth Judicial District Attorney’s Office to ensure that these cases and the information they obtained in their investigation were prosecutable.

As this is still an on-going investigation, the arrest warrants have been sealed at this time. Additionally, we do anticipate additional arrests in the near future. We are also asking for the public’s assistance in confirming the identity of the individual pictured below. 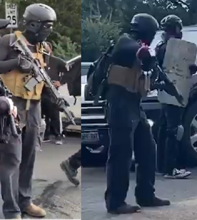 “As a department, we are committed to ensuring everyone’s rights. That includes protecting those who wish to speak against us and law enforcement as a whole. But what we cannot allow is for illegal behavior in our city.” –Chief Vince Niski