The City of Colorado Springs is working to make it safer for people in all transportation modes and across all abilities to get around town. Photo red enforcement is a valuable tool to change driver behavior and has been implemented to improve safety by reducing red-light running violations, collisions and injuries without affecting city funds.

The program acts as a force multiplier, allowing our police officers to be more safely and effectively deployed while still addressing traffic enforcement.

FAQ: Why do we need red-light safety cameras?

FAQ: What does this program cost taxpayers? 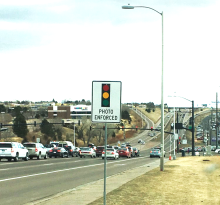 You will know when you are crossing a red light intersection. Each intersection is marked clearly with signs to alert drivers that cameras are in use ahead. Cameras will capture red light runners from a single approach at each of the intersections.


FAQ: How were the locations determined?

As red light cameras at each intersection are implemented motorists will have a 30-day education and warning period for violations at that intersection. The registered owner of a vehicle may receive a notice by mail that a red-light running violation has occurred, but no fine will be issued for the first 30 days. After the 30-day warning period, violations confirmed by staff will be issued to the registered owner.

FAQ: What should I do if I receive a violation?

FAQ: How much is the fine and are points assessed on my license?

A red-light running violation occurs when a motorist ENTERS an intersection AFTER the traffic signal has turned red. 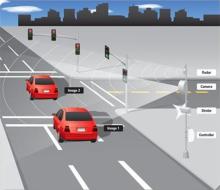 FAQ: Why does the camera flash when no one actually runs the red light?

Safe driving protects you and our community.  Here are some tips for how to be a safe driver:

Distracted driving is a dangerous and growing concern for all communities. Learn more and commit to safer and distraction-free driving from  www.distraction.gov